A Week in the Life of a Running Club 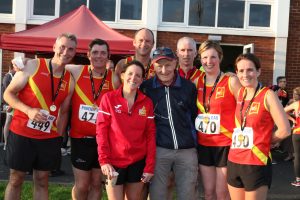 You know it’s going to be an epic Weekly Report when the first photos and results of the week are in your inbox by Wednesday evening! This past 7 days EDAC athletes have appeared in multiple events in many different venues undertaking an immense variety of challenges and disciplines.

It underscores the fact that as a club we have runners encompassing the full spectrum of the sport of running/athletics – track, trail, road and fell races were all in the mix this week with distances from 100m sprint to ultra distance being ticked off by runners of ages ranging from 12 years old to a number best kept secret, by both male and female and by newbies right up to athletes of great experience.

The common denominator is that all are out to enjoy their participation and if winning a medal or topping an age category or getting a PB is included then great but regardless of accolade, our runners feel better about themselves for having taken part.

So if any of that appeals to anyone not currently a member of East Down AC, then why don’t you come down to see what it is all about. We welcome new starts or even re-starts and will help you find the right fit of running for you. Contact us by email to membership@eastdownac.co.uk or through the East Down Athletics Club Facebook page. 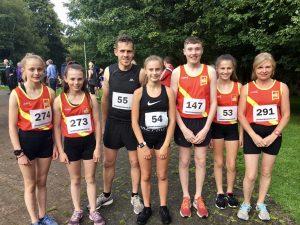 Back to the results then – first in was the Crawfordsburn Trail 5K. Davy Foster as first EDAC runner came 13th out of the field of 229 on the undulating trail course in a time of 19.26 but the honours of the night went to the Juniors from the club – Kirsti Foster, Lucy Foster and Anna Gardiner took 1,2 and 3 on the overall Female podium in 19.39, 19.53 and 19.56 respectively.

That was an impressive display of strong running by the trio. Mackenzie Murray took a steady 21.12 to complete the 5K and Lauren Madine was home in 21.55. Sharon Madine (24.16) got top spot in her Age Group F45 despite her comment that it was a bit too hilly for her liking! Well done folks.

Closer to Home for the Ardglass Festival 10/5K 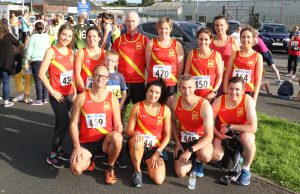 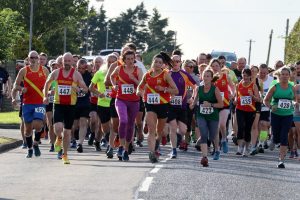 Ardglass Festival 10/5K was on the same evening as Crawfordsburn and was well supported by the Club. There was a pack of 100 runners on the start line for the 10K and another 60 in the 5K. In the 5K event William Taylor ran gamely to finish 24th in a time of 30.25. In the 10K Declan Teague led the troops home and was pleased with his run as he is not normally to be seen racing at this distance.

He was 5th overall in a time of 40.26.  Home favourite Deirdre Weatherall pushed hard from the start and came in 10 seconds behind Declan in 6th overall and 2 minutes clear of the second female Louise McCourt from Ballygalget AC. Cheryl Denvir finished strongly to take the third podium spot in 43.29.  All the athletes found the 3k uphill start a bit of a challenge and the hill back into Ardglass was also mentioned more than once but the downhill finish was a welcome relief.

John Smith who is working hard to regain fitness was happy to smash the hour barrier in 56.23 and Karen McFall came in a few minutes later to join the rest of the squad. By all accounts the Ardglass Festival Association had worked hard to put this together and there was a warm welcome extended to all who took part. A special mention was made of the support en route and the enthusiasm of the marshals as well as the great grub at the end. It is these things that will ensure that runners return. A good night out for all concerned.

On Friday night, Dee and Janine Murray along with Gareth Amos braved the weather for the Mallusk 5 Mile Road Race. With a change of route and each of them taking on the race for the first time, warnings of the infamous hill filled them with nervous anticipation. Both Dee and Janine likened the first mile and a half to the Hill and Dale Series as there really was a bit of a slog to the summit. Beyond the hill, the race took on some rather scenic countryside through Mallusk and the surrounding area. 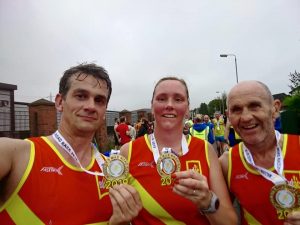 All three athletes came home to the finish line with a big smile and some excellent times, Dee, 32:37, Janine and Gareth finishing together in 43:46. Well done to all three on what is a challenging, but enjoyable course. And the pizza? Yes that was the reward for the finishers. Nice one, Mallusk Harriers! In Gareth’s words,  “One to look out for next year, a lovely route (the hill is a mere speedbump), superb medal, goody bag and loads of pizza & cake, what more could  you want?”

Back at the Track 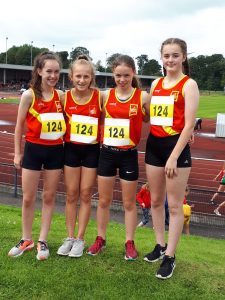 A junior Team of Kara Trainor, Anna Kearney, Lucy O’Neill and Emily Burns with Anna Gardiner as reserve travelled to Antrim Forum on Saturday for the NI&Ulster Relay Championships. With 2 of the team eligible for U13 but not able to get 2 others of the same age, the decision was made to go in the U15 category with the older girls. Despite half the team therefore technically underage they ran well and were just off podium by a narrow margin. A good performance all round.

The Going Gets Tough at the Seven Sevens

Due to the dodgy forecast of thunder and lightning the Nimra Seven Sevens hung in the balance until early Saturday when the green light was given for it to go ahead. As with all these mountain events however it is only the toughest who put themselves out there so despite the conditions a field of 82 runners started the race (with 3 retiring during the day).

This results in nearly 19 miles of travel and a total of 8,500 feet of climbing. Not surprisingly the ground was wet after the heavy overnight rain especially along the section that followed the Ben Crom river and all who finished should be congratulated. 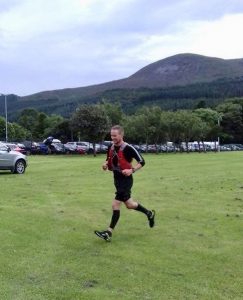 How Far is too Far?

Just as we have our “mountain men (and women)” in the club so we have our ultra aficionados and one who has been in action for more miles than most in recent weeks is Keith Reilly. On Sunday he headed to Londonderry Park in Newtownards for Race 2 of the Ultimate Ultra Champion. The nature of this is mind blowing to some – running in circles with very little other than your own thoughts to keep you going. It requires mental strength as well as the ability to pace yourself. 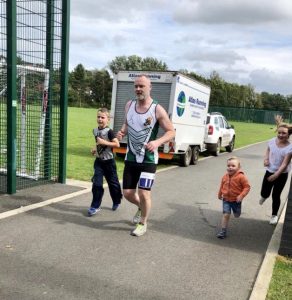 Keith reckons he completed the 50K in 6 hours 35 which was 20 minutes quicker than in Round One. He found the longer laps (29 laps v the 125 at Mary Peters’ Track) easier and enjoyed crossing the line with his children who had supported throughout. Round 3 takes place in Castleward next month but for now Keith is off to somewhere sunny for a well earned rest. I wonder will he pack his trainers though?

Clare Carson and Kevin Kelly had a full program this weekend  After they spent the previous evening celebrating Clare’s parents’ Golden Wedding Anniversary,  they had an early start to get to the line for 8am in Dublin for the popular Rock’n’Roll Half. By shimmying through the crowds on the start line they made sure East Down AC was represented at the front of the pre race photo but this did mean that Kevin was caught out wearing a non-regulation club vest. There was something to do with him ironing his “ new” vest that apparently caused this but least said the better! 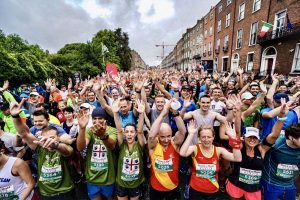 According to Clare, “There were bands every mile which covered the “rocking” but the course definitely covered the “rolling” as we wove our way through the streets of Dublin to the finish line festival in the Phoenix Park.  Our club mates will know we don’t run together very often but we started and finished together (and were still speaking) in a respectable 1.51.  Definitely recommend this one – it’s well organised, shiny bling and brilliant atmosphere”. A weekend well spent for these two.

And that’s a wrap for 7 days in the life of EDAC but you may be wondering what’s next? The best way to check this out is to head to http://nirunning.voodooltd.co.uk/fixtures/ as the welcome reincarnation of this popular site has details on all the races coming up both near and far and how to enter etc as well as race reviews and reports to let you see what you have missed and to keep up with the happenings on the local running scene.