East Down AC at NI and Ulster Road Relays 2019

HomeClub NewsEast Down AC at NI and Ulster Road Relays 2019

The NI & Ulster Relays masterminded by Orangegrove AC was this year held on a Sunday for the first time and despite fears that this would impact the entry, a huge crowd of athletes descended for the event. The weather gods were also kind as conditions were far better than the day before.

This day always kicks off with Junior races and their enthusiasm is an appropriate warm up act. EDAC was ably represented by runners in several age groups. In the Primary Girls race Kelsey Murray and both Lily and Kari Foster took part with Kari surviving the scrum to get a second place. Alex Robinson had a similar jostle for position and looked to be on course for a 3rd place but the final surge saw him relegated to 5th. In the U13 Ollie Robinson was unfortunate to be on the backfoot at the start and was playing catch up throughout in the end coming 6th place.  Also in U13 Jodi Foster managed a heroic 3rd as despite being boxed in on the final straight, she somehow found a gap. Emily Burns was 16th out of 35 in the same race. In the U15 Kirsti Foster was well ahead to take the win by 15 seconds and Lucy Foster also ran extremely well to get 3rd. Lauren Madine was 9th. Mackenzie Murray was in the U17 and despite being young for that group had a decent run in 15th place. 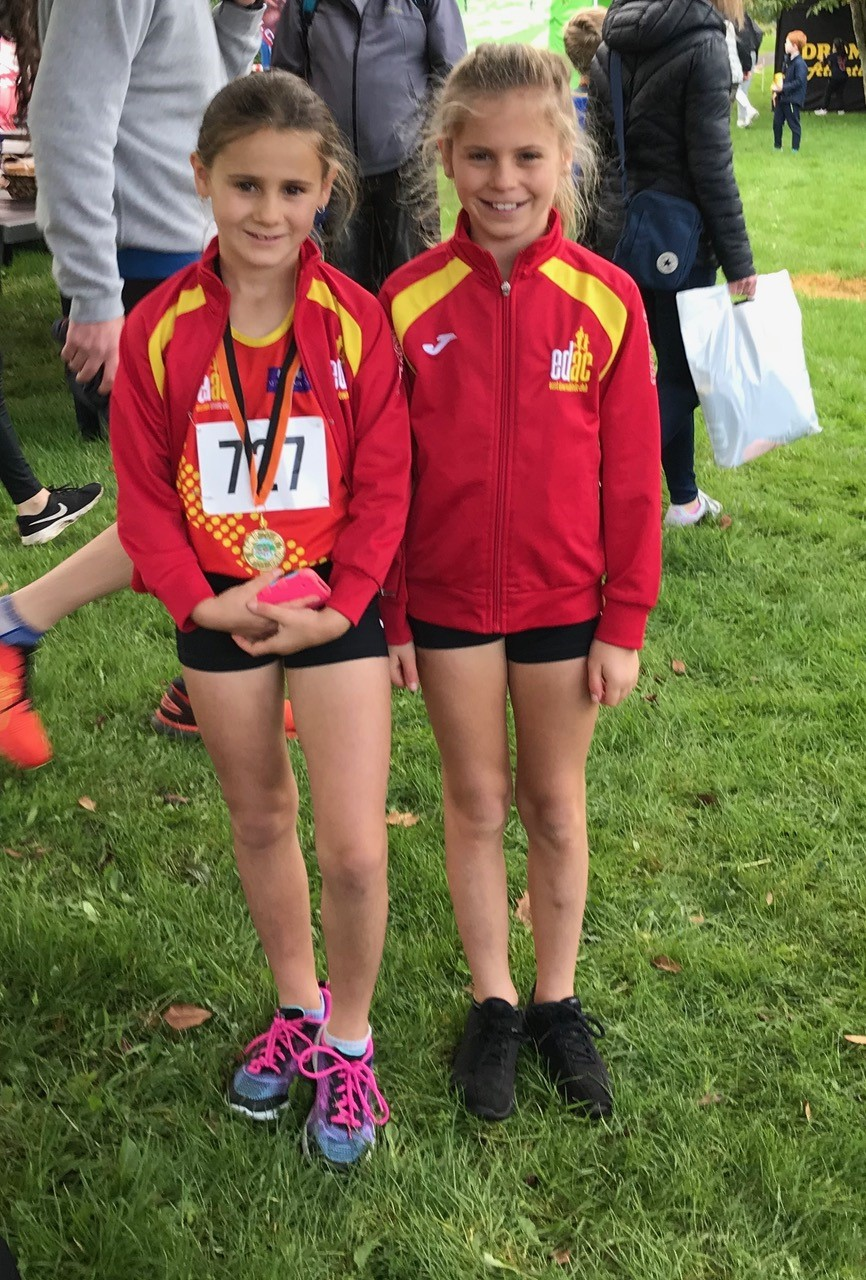 Lily and Kari Foster after the Primary Race

With the younger runners off in search of refreshments, the path was clear for the Masters Women to take the stage. The attraction of the Relays is the team element as it creates great camaraderie.  The A runner for EDAC was Clare Carson and she paced it well to hand over to Cheryl Denvir. As usual Cheryl put in a strong effort leaving Sharon Madine who had never done this event before to finish the job. She was unfazed and stuck to the task bringing the team home in 17th slot out of 48 which pleased them and the cheerleaders no end. The winning team overall was North Belfast ladies. 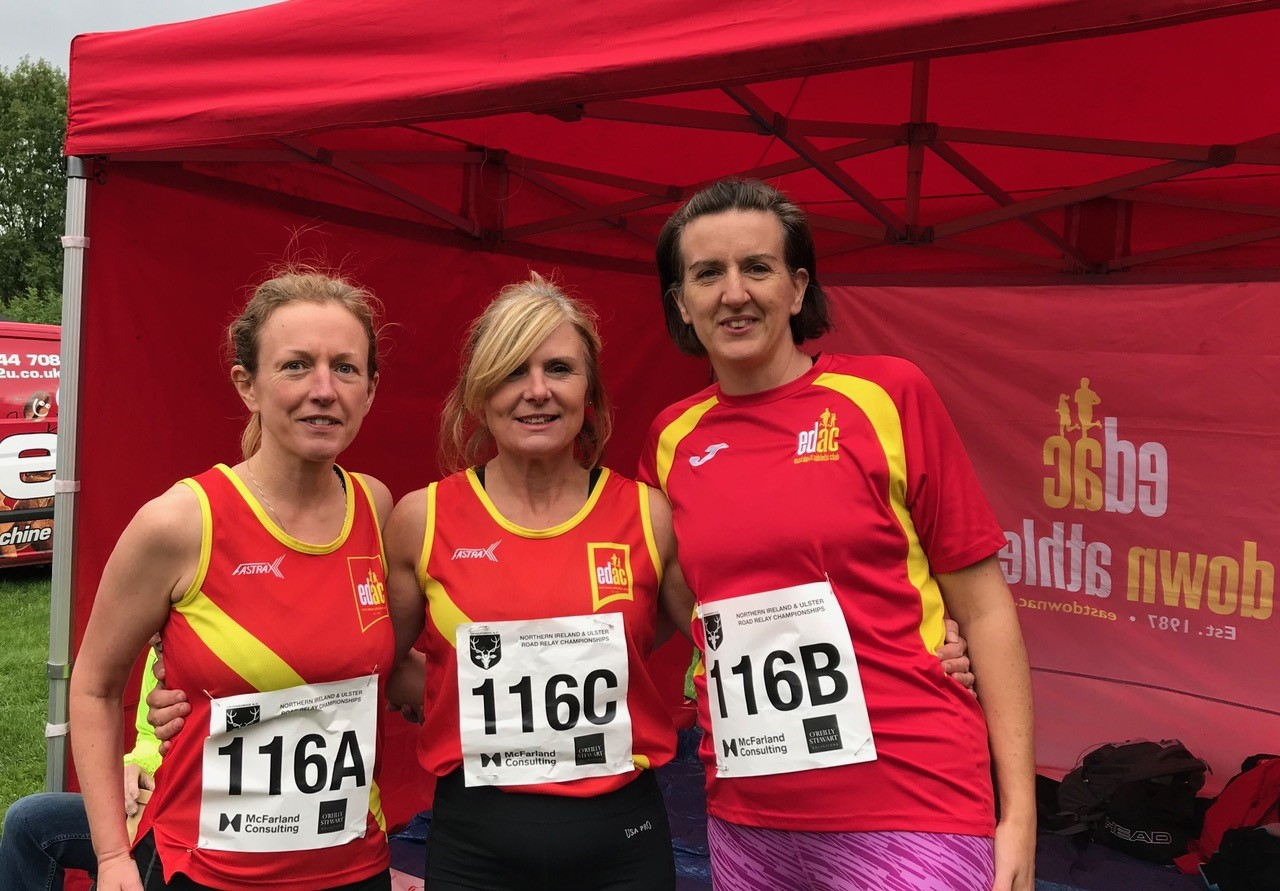 Next up was the Masters Men. With marathon training and injury decimating the Men’s availability they were only able to field 2 teams overall on the day but with good sideline support and great efforts all round the A Team managed a very creditable 10th out of 51 teams. The order on the day in the EDAC A team  was Paul Lloyd who went out with the intention of hanging on as best he could to the likes of Mark McKinstry who was the fastest masters’ split of the day at 9.49. A tall order indeed. Paul was followed by Martin Willcox who every year says it is not his thing yet returns for more. He in turn gladly handed over to Davy Foster who lapped it up -literally – being a bit of a track fan. That left Neil Curran who went out like a whippet and gained a few places en route with the fastest EDAC men’s split of the day (11.07). The B Team of Kevin Kelly, John Smith, Seamus Savage and Dee Murray gave it their best shot too. Credit has to go to Dee for filling in the last leg due to a couple of cry offs. Considering that he had ran 20 miles on Saturday he produced the fastest leg of the foursome clocking 12.42 for his 2 laps. They were 47th team of 51 and rightly proud of their collective efforts. 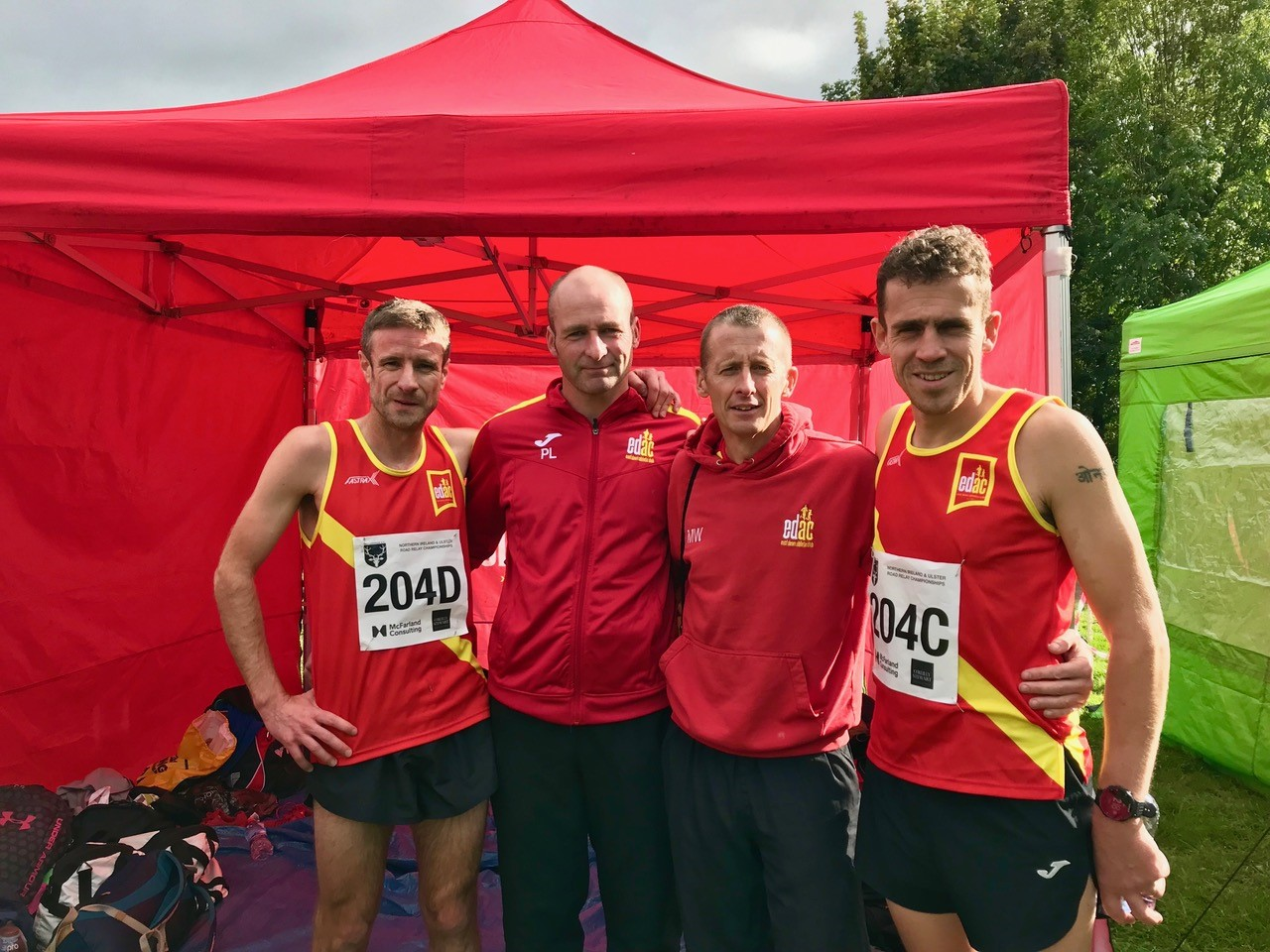 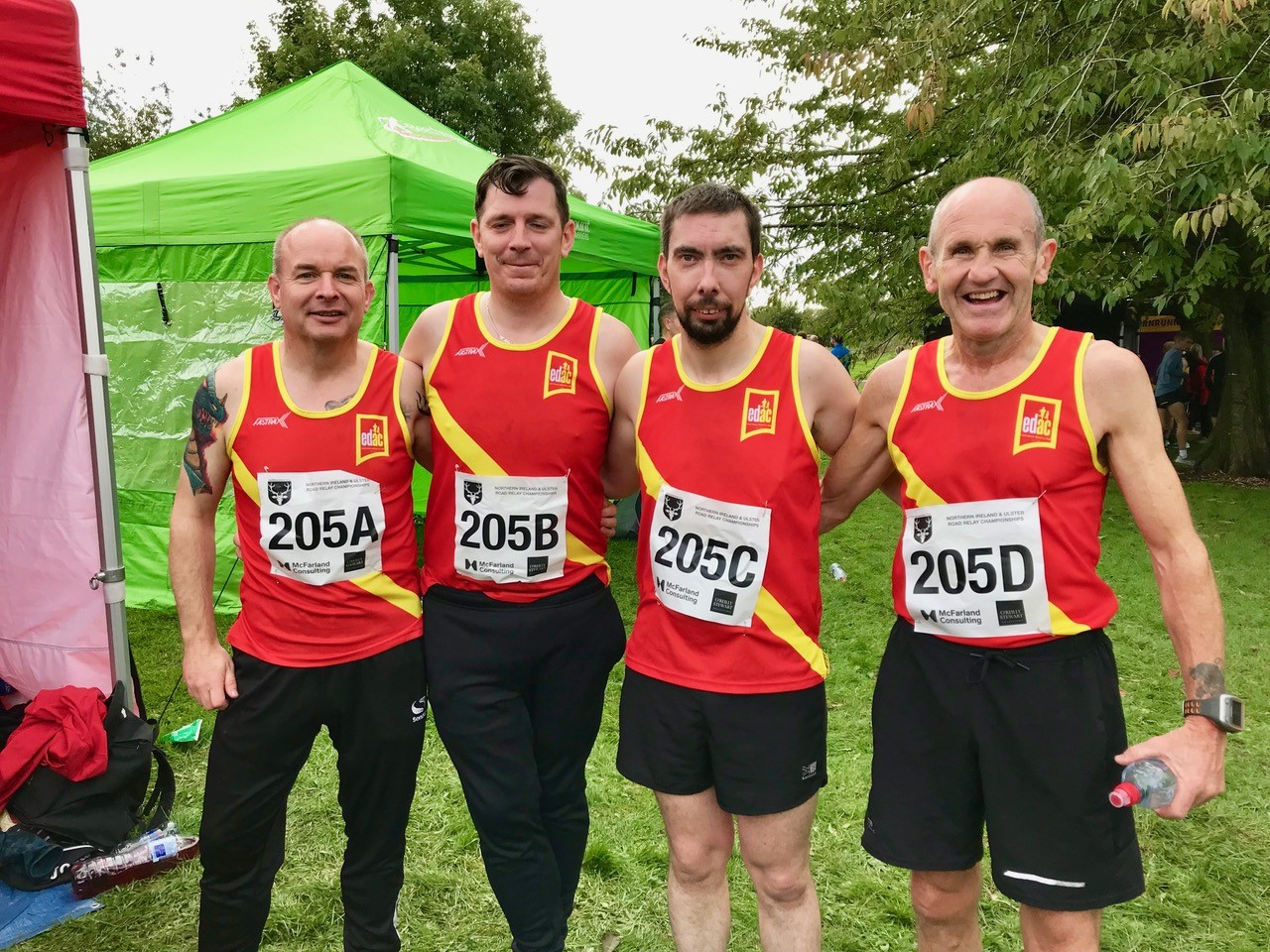 Excitement was ramping up in the EDAC camp as the Senior Ladies’ Race approached. Last year the EDAC Team came 3rd and I commented then that “the only way to top that performance is to go one (or perhaps even 2) better next year!” This year’s team included Sinead Sweeney who having graduated and left QUB AC was running unattached until she joined EDAC earlier this year. She had in fact been on the top podium spot last year in her last race for QUB so this all added to the pressure for this year’s line up! The nerves were biting as Catherine O’Connor waited in the pen as first leg but once the gun went it was clear that she was in fine form. She was in the lead by the time they came round after the first lap and coming in to swap she looked confident and strong and left the team perfectly poised by squeezing out every last second to the line. Caroline MacNabb as the middle runner had a mental battle ahead as she was pitted against Rachel Gibson of North Down AC. Knowing Rachel’s abilities, Caroline prepared herself to be reeled in but also had to concentrate on holding off other attacks. She ran out of her skin to minimise the damage caused by Rachel who in fact ran the quickest Ladies’ split of the day (11.08).

As they came to the changeover, Rachel had edged a slight gap and Sinead Sweeney hit the track like a bullet with her eyes focussed on Erin McConnell, North Down’s last leg runner. The danger would be to try to close the gap too quickly and then suffer but Sinead kept her cool and ran the first lap arriving back at the crowds just as she went up on Erin’s shoulder. The second lap then she let rip and her decisive move took her into the lead where she ran to the line looking stronger than every step. In the end the gap was a decent 18 seconds for a championship win. For those who will never attain those speeds the next best thing is watching a race like that unfold and the cheers when Sinead crossed the mat showed how tense it had been. A great day for the club. Sinead ended up with the second fastest split which was praiseworthy indeed but she paid testament to the team as a whole, acknowledging that it was a race of tactics, grit and confidence in equal mix. It was lovely to see all three teams on the podium showing respect to each other – North Down holding on to 2nd and City of Lisburn who just edged Newcastle AC off the last spot to take third.

EDAC ladies also had a B team which performed admirably as they managed to get 8th slot out of the 30 teams taking part. Katie Neary in her inaugural performance for the club ran well as their lead runner and she handed over to Edie Carroll without a hitch. Edie pushed herself throughout before Joanne Foster kicked up her heels and ran the final leg. It was gratifying to see two of our teams able to be in the mix and bodes well for cross country when numbers are needed to field a squad. 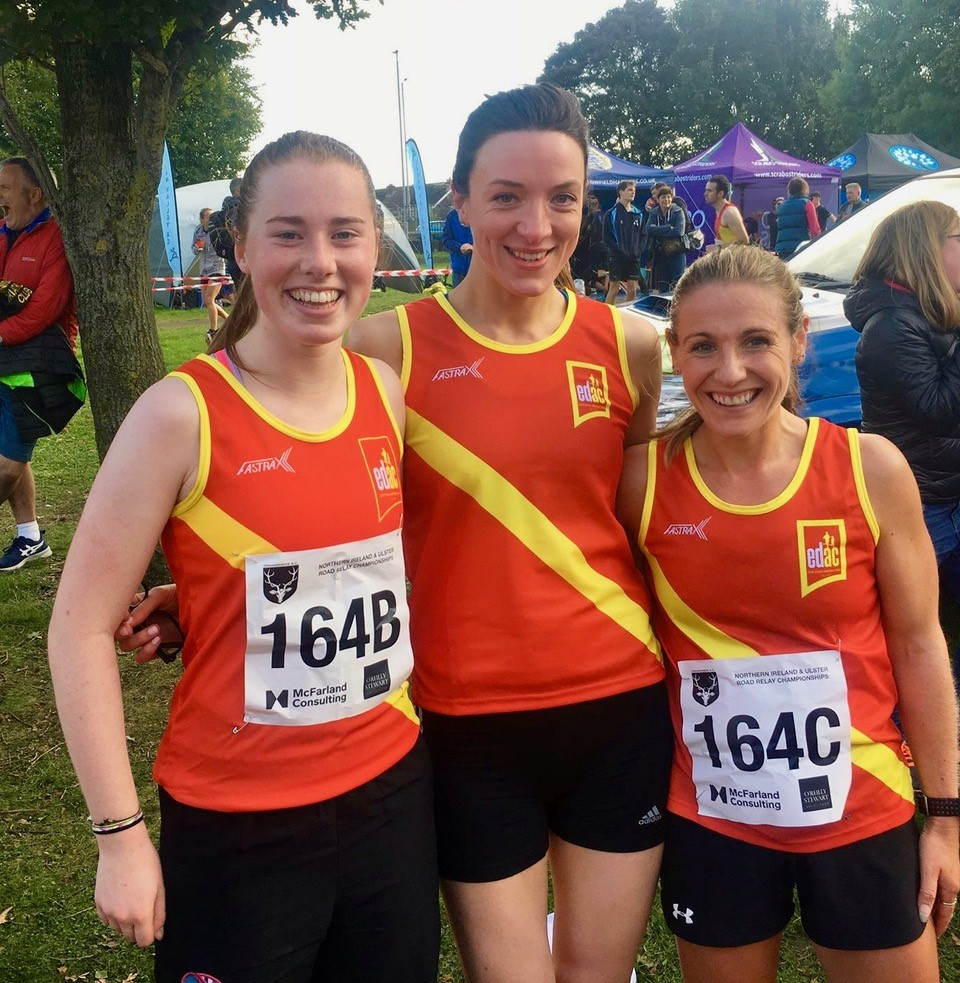 In the Men’s Open race EDAC were sadly without a team and North Belfast went on to win it to add to their Masters’ Men and Masters’ Ladies triumphs. In addition to this clean sweep it should be mentioned that Mark McKinstry (winner at Jimmy’s 19 in 2018 and 2019) not only set that fastest masters’ split helping his team break the course record for Masters, but also ran in both the Masters and the Senior!  A sign that his form his good for the season ahead!

Orangegrove AC deserve high praise for the handling of this mammoth event. They have it down to a fine art and the races ran smoothly without a hiccup. Well done to all the volunteers who pulled this together.