December can be a busy month with many other demands competing with training and racing. Only a few of our members managed to take part in events this weekend and many of those who did, travelled some distance to do so.

Declan Teague may not have covered as many miles to get to his event as some of the others but he made up for it by clocking up an Ultra on Wednesday when he spent over 6 hours running around Lough Shore Park in the latest endurance event promoted in the East Antrim Marathon Series (EAMS). His day started at 8.30 am and almost ended at around 10.30 as he cramped up badly after 15 miles but after some stretching he got going again and ended up with 38.1 miles on the clock, in 6 hours 11 minutes, and which for him made his total marathons completed count 64. If you consider that it was the 900th

marathon for David Brady and the 667th for Peter Ferris from Coleraine then it might seem to the uninitiated that Declan’s efforts are insignificant by comparison. But these guys are unique and as anyone who has ever completed just one marathon will testify, 64 is a formidable total by any standard. Considering that he also placed 3rd overall in terms of the distance covered then it was a very successful day out.

Sinead Sweeney was in Telford as part of the NI and Ulster Team taking part in the Inter Area Series. A week after a good run in the Seeley Cup, she upped her game another notch and ran an impressive 35.50 on a windy day when PBs were not that easy to achieve. Sinead was only 10 seconds off her previous best time and placed 3rd of the NI Runners and 23rd Female out of the 423. A great performance all round. Well done!

Gordy Graham took himself off to sunnier climes and took part in the Lanzarote Half Marathon. Last year he had completed the full distance at the same event but with recurrent niggles enforcing a recent restriction on long runs, he wisely opted for the 13.1 route. The strong blustery winds associated with the island make this a tough course, so he was more than happy with his time of 1.17.53 and his 7th place overall. He thought he was hallucinating at one point when he imagined that he glimpsed another EDAC vest but he was absolutely correct as it turns out that Linda Cunningham had chosen to take part also. Linda suffered a debilitating injury many months ago so it is pleasing to note that she is back in the game. She took on the full distance and was delighted to reach the finish line without incident. She has missed being able to rack up the miles as she is  one who thought nothing of a marathon almost every weekend and she has also been missed by regular readers of these weekly reports. Good to see you back Linda!

A ROUND WITH DENIS AGAIN?

Another one who has no fear of the long haul is Niall Gibney. He, together with Gavin Hynds had completed the Denis Rankin Round last June. This feat of endurance can be summarised by saying that it is all the peaks in the Mourne which are more than 400m in height and the route covers 90km and 6500m in ascent. Oh and you only have 24 hours to do it. Sounds easy when you say it quickly! You would think that once would be enough but Niall felt the urge to have a second go. To make it harder he set out to attempt it in an anti clockwise direction and to ensure that it was really testing he wanted to do it in Winter.

ONE OF THE FEW? 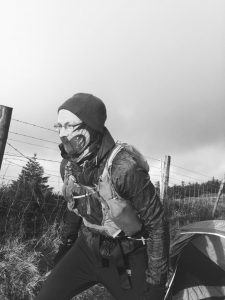 Only one other person has managed the anti clockwise route and that was in the Summer months, so this was Niall’s attempt to set an indelible marker and to stake his claim for a place in the record books.  At this stage we can report that he made it to the end in a gruelling 20 hours and 21 minutes and has had official confirmation by the organisers. The full gory details will follow but it appears that with a bit of help from Gavin (6+ hours of accompanying him en route) and the support of a roadside team of friends and family that he arrived back in Donard Park in more or less one piece. The weather kept most of us indoors yesterday so to be exposed to that storm for that many hours is hard to imagine. Huge respect is due to him and kudos for Gavin too for providing the mental support and physical companionship when things were at a pivotal point.  A well earned rest is hopefully now on the cards. 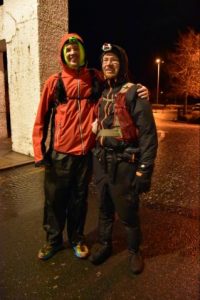 A quiet week for them too but on Tuesday last week 312 primary school children took to Donard Park for the second round of the Flahavans’ Primary School Cross Country league. In this competition most schools from Northern Ireland enter either teams or individuals and compete in 2 heats. The best 3 school teams and 5 best individuals from each race, based on scores from the two heats, go through to the final in January.
The race was 1400m and started on the football pitch before climbing uphill under the trees. More twists have been added into the course this year around the trees making it more technical and favouring those who got off to a clear start. EDAC had 2 runners representing their schools. Kelsey Murray, who is in primary 5, ran well in the first of the girl races coming in 28th. Alexander Robinson missing his school trip to the panto to take part, was rewarded with a place in the final when he came in 15th. His combined placings of 8th in the first heat and this placing earned him 4th individual boy. 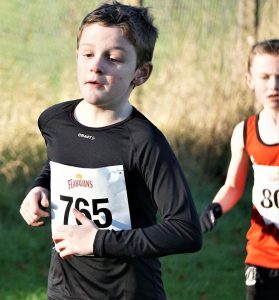 There was to have been a Cross Country race on Saturday but as a result of the sudden passing of Irwin Speirs a founder member of Acorns AC, the Mighty Oaks event was called off at late notice. This allowed his friends and running associates to pay their respects at the MUSA parkrun where he had been both Event Director and a key member of the set up of the event. East Down AC would like to express their condolences to Irwin’s family, his club and to all who knew him. He will be missed in the running community where he was widely known and well liked.

On Thursday night at 7.15 the Club’s Annual Predicted Time Trial will take place in the Downshire Estate and ALL Senior members are encouraged to come and participate.  It is not a matter of how fast you can run the 5K route, all you have to do is predict how long it will take you to run/jog/walk the distance without your watch of course, and the person who is nearest their predicted time wins!!

The procedure is to register and record your predicted time from 7:00pm at EDAC Clubrooms, pay £2 entry fee, warm-up jog to Downshire, or make your way there by 7.15pm,  and then take part in the measured 5K Time Trial.

Return to EDAC Clubrooms for refreshments and prizegiving.

PLEASE COME AND TAKE PART – THIS IS AN IN-CLUB EVENT

Next Saturday the Seniors face a lengthy journey to participate in the North West Cross Country in Gransha Park, Derry but at least they only have to run 6K when they get there.  And it’s unique too in that everyone runs together, men, women, older men and women and junior men and women. It is literally an entire human race, starting at 12.30pm!  Under age races begin at 11.30am.

On Sunday East Down juniors will be competing in the All Ireland Uneven Age Groups Cross Country Championships at Cow Park, Dunboyne, Co.Meath.  while the Seniors will be attracted to the Crossgar Santa Run 5K starting at the back gates to the Monastery at 1pm organised by Atlas Running. Further information from Adrian Daye 07876560015.

Good Luck to all EDAC runners wherever they are competing next week.