The Turkey Trotters had to contend with a grizzly Boxing Day as low cloud, rain and strong winds made for difficult conditions on the hills. The shorter course had to be used for safety reasons with an out and back route to the Hares Gap via the Trassey Track and Tollymore forest paths.

Seventy-Two hardy souls turned up, including last year’s winner Seamus Lynch keen to retain the Martin Mc Mahon Trophy, Paul Pruzina looking to win it for a second time, and Eoin Lennon, who improves every year looking for a first win. Megan Wilson looked like the likely winner of the ladies’ race but there were a few with other ideas.

At this stage, I should mention all the marshals and helpers who volunteered for an uncomfortable couple of hours work in rather hostile conditions. If it wasn’t for their good-natured determination and support on a bad day this event couldn’t happen.

The pace was as fast as ever through the forest and the climb up the Trassey track turned out to be more entertaining than usual with a torrent of water flowing along it at one point and knee depth river crossings at other points. Higher up the glen, the water poured out of every fisher in the ground and the climb to the Hares gap was slippery and mucky.

Eoin Lennon had established a short lead over Seamus Lynch with Paul Pruzina just behind. There was a bit of a gap to the next group which included Andrew Tees, Adam Cunningham and a former winner and now vet 50 speed machine Neil Carty. Megan was leading the ladies but Lisburns Karen Wilton was not far behind.

The run down from the Hares gap was treacherous and resulted in a few cuts and gashes and the rough Trassey Track tripped up a few but before long everybody was making their way through the foaming leg washes of the overflowing rivers which resulted in the greatest array of shiny white legs with goosebumps that I have ever seen at a finish line. What was I reminded of? Ah yes..Turkeys!

Eoin held onto his lead and claimed the Turkey Trot title for the first time just ten seconds ahead of Seamus with Paul a further fifty seconds adrift.  Fastest vet in  7th place overall was nifty fifty-plus Neil Carty and Megan Wilson won the ladies’ title with a couple of minutes to spare over Karen Wilton and Karalee Mc Bride. 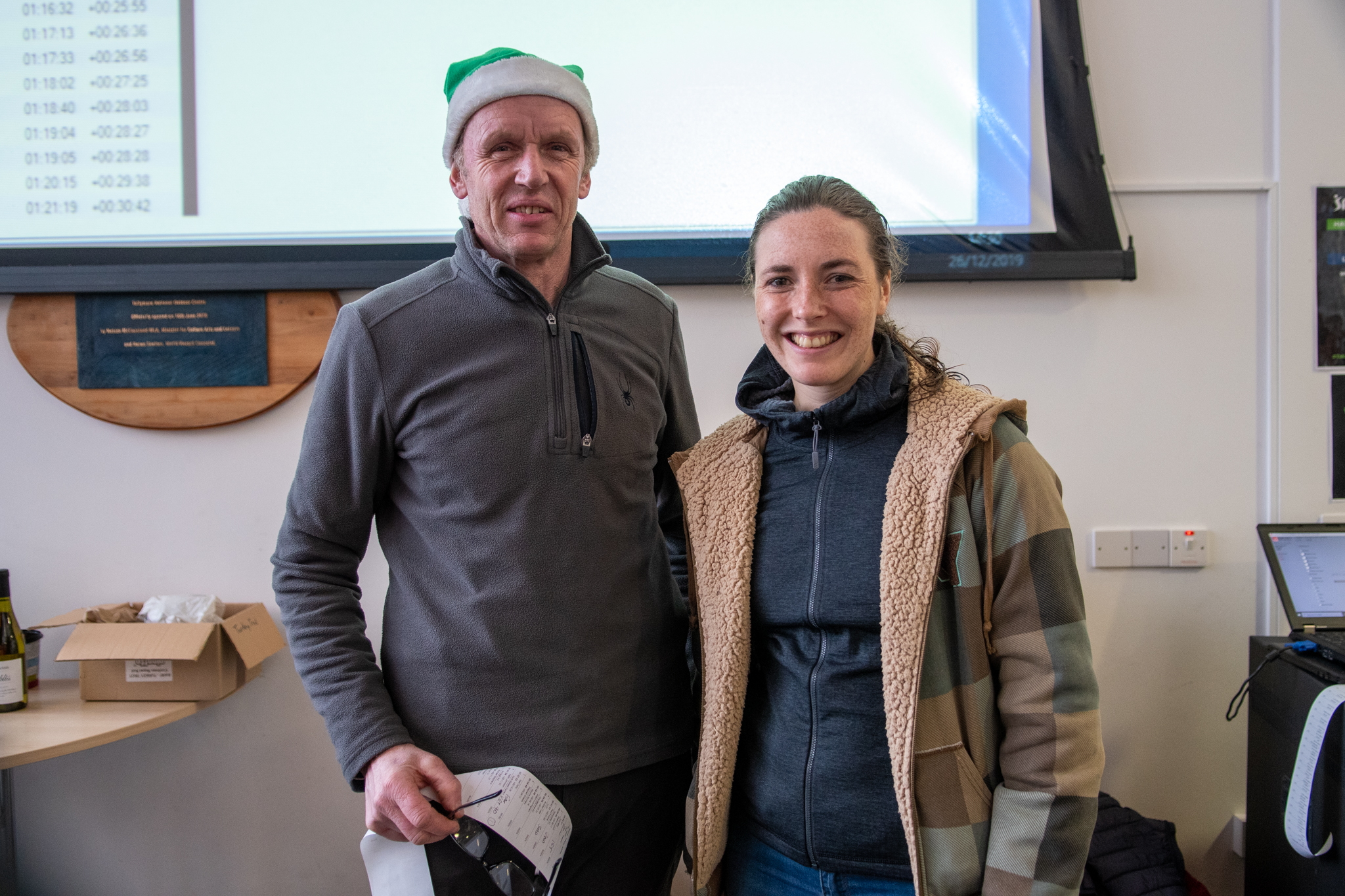 The prize-giving was held in the Outdoor centre where everybody enjoyed the food provided by Barf club members and the generous selection of prizes were distributed. Paddy Mallon entertained with his spot prize quiz then it was time to tidy up and wish all a happy new year and good running until the Turkeys gather again next year for whatever the elements the season decides to administer.

The final results are below and photos can be found here and here.