The Weekly News from East Down AC

Just as he did last year Tom Dowey travelled the furthest of the East Down runners over the Christmas period to Greencastle Co.Tyrone in fact, on Boxing Day, to run the famous 5 miles race. He maintained his good record in the race by placing 781st in the field of over 1,000 runners.

This year’s events in Burren were to be 10 Miles and 6 Miles races also on Boxing Day, but unfortunately due to a funeral in the area the ten mile route had to be shortened and turned out to be an 8 mile race. In the words of East Down’s Gordy Graham, who won the race,  “it was far enough” as the course contained “a few serious uphills” though he did enjoy the benefits of the downhills that come along with that! He was also “delighted to take the win ahead of Chris Devine of Newry City Runners who has been in flying form” of late. This is proving to be quite a happy hunting ground for Gordy as he won the shorter distance race last year. Gordy however got his Ten Mile weekend distance with considerable interest when he turned out again on Saturday in the Christmas Cracker.

In Gordy’s absence in the shorter race, Catherine O’Connor proved a more than worthy deputy, taking the title this time, to preserve East Down’s name on the trophy.

Unfortunately I don’t have any of the details about times etc. at the time of writing.

Who would Aaron McGrady get to partner him in the famous Cracker race this year on 28th December. That was the question which most of those competing at the front end of the field were asking before Saturday’s keenly awaited renewal of the epic Pairs race? Zak Hanna and Seamus Lynch, last year’s winning duo were highly fancied to repeat the feat, given their recent form, though Aaron had set a new Pb in last month’s Seeley Cup and had finished 2nd and 5th in the Cracker in 2017 and 2018 respectively, so he was not without hope and worthy of respect from all the top duos. For those of you who don’t know the Cracker is a race run in pairs who must cross the finish line together.  If anyone arrives ahead of his/ her partner they must undergo a sort of quarantine, by waiting in a specified area about 50 metres from the finish line, in order to meet up again and have a reconciliation, before they’re allowed  to cross the line and record their finishing position. There was considerable speculation as to what had happened when top cross country and road runner, Mark McKinstry, appeared in the last 400 metres, in splendid isolation!! “Where was his partner?” and “Did he start without one?”, were just two of the questions asked by spectators at the finish line, but when he was directed into the waiting area it was clear that his companion, whoever he/she was, had been unable to keep up with the Glenshesk warrior. In the form he was in on Saturday no-one could have! But nevertheless he had to stand and wait at least 6 minutes until his partner, Stephen Wylie of the Victoria Park & Connswater club, who is no mean slouch, arrived,  just in time to enable them to cross the finish line in 57.08, in 4th place overall. Meantime Aaron and his partner Andrew Barrington who runs for the same London based club, Victoria Park & Tower Hamlets AC as Aaron, had comfortably crossed the line for a superb win in 53.29, ahead of the Hanna /Lynch 55.03 and Johnston/Scott 55.55 combinations which were 1st and 2nd respectively last year. So the mood was certainly bright as the winners joined the crowds along the finishing straight to await the arrival of the remainder of the East Down contingent.

ANOTHER PODIUM PLACE FOR THE LADIES

Naturally Aaron’s thoughts were for his girlfriend Hannah Somani who was competing alongside her friend Georgina Wiley in the Female Under 80 category, the youngest age group there is, based on the combined ages of the pairs. So there was further celebrations when the pair duly appeared amid speculation, later confirmed, that they were in 2nd place in their category! They placed 60th in 1.10.56. The winners were the Beechmount pairing of Sarah Laverty and Catherine Diver who placed 26th overall in 1:06:30. So there’s something to work on for next year?

HOW THE REST FARED

Just one place behind Hannah and Georgina was Mark McDowell in company with Gary O’Connor, though there were already 3 other East Down runners past by then, Dee Murray in the company of Newcastle’s John Kelly in 35th and Dermot Cahill and Joe Napier in 44th.

They were followed by Caroline McNabb and Declan Morgan City of Lisburn who were 4th  in the Mixed Under 80 category.

There were 24 EDAC runners in total spread across the various categories, though I cannot find any trace of John Manley and Lisa Milligan finishing even though I saw them leaving the town in the early stages of the race? 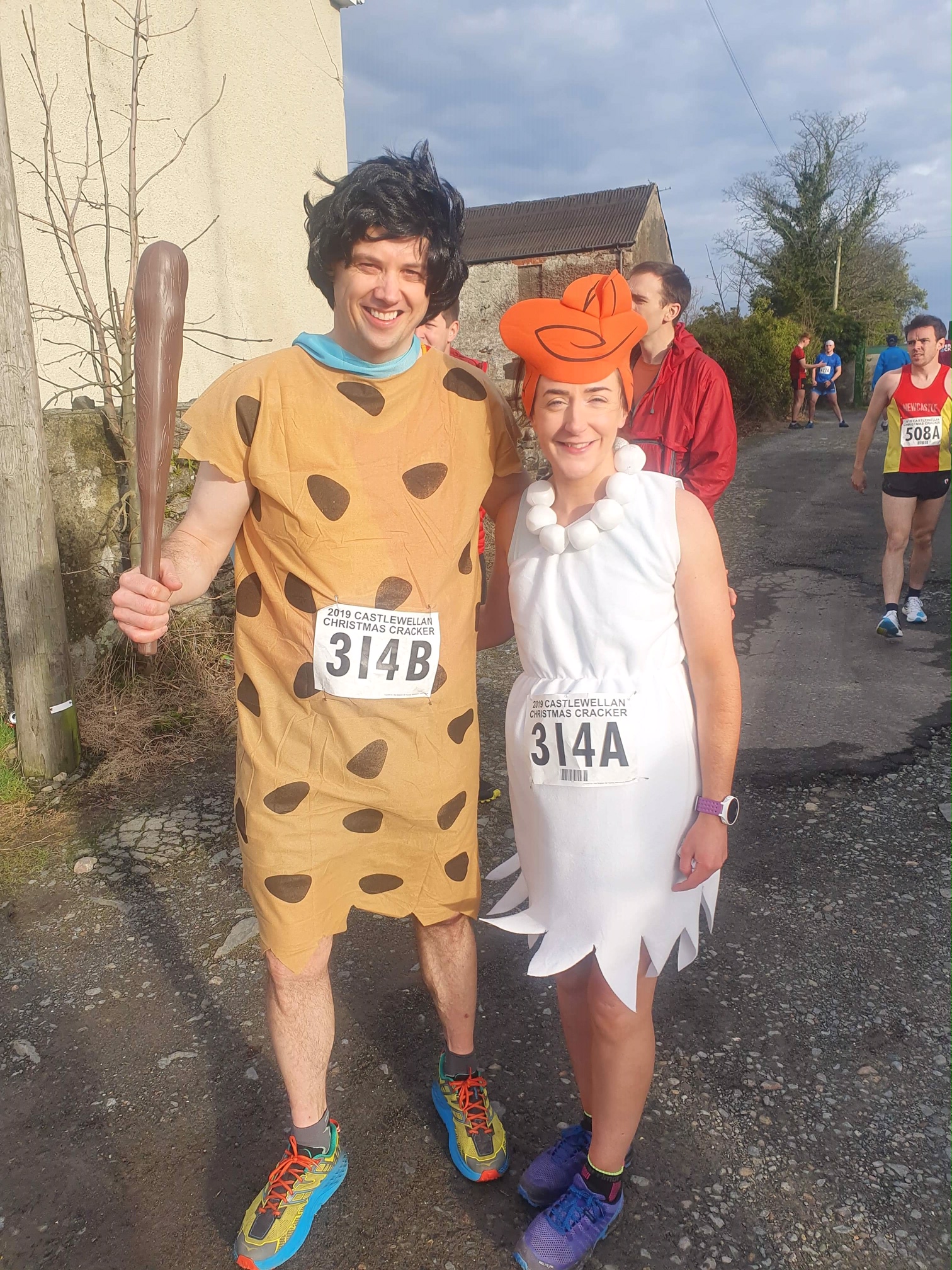 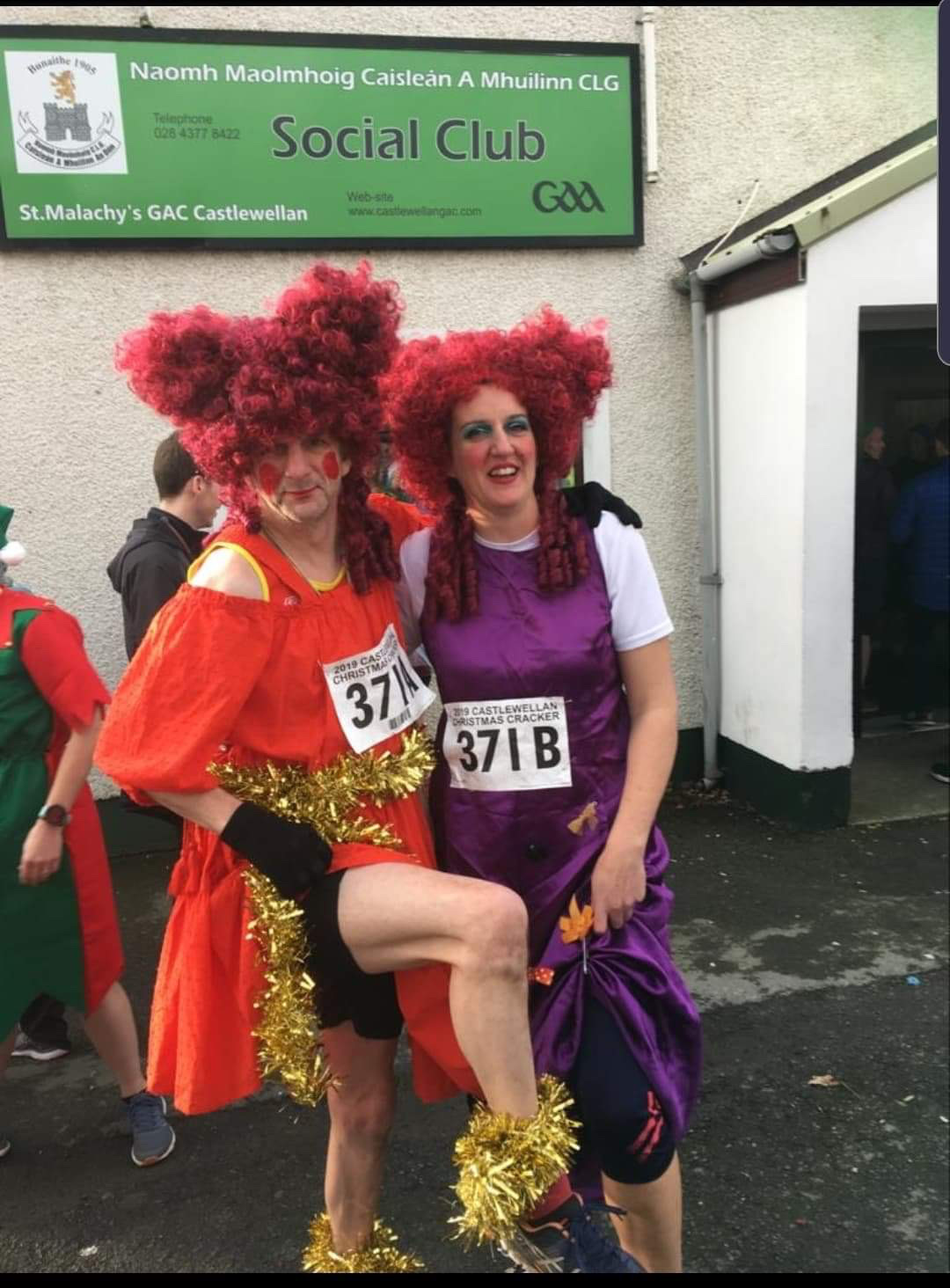 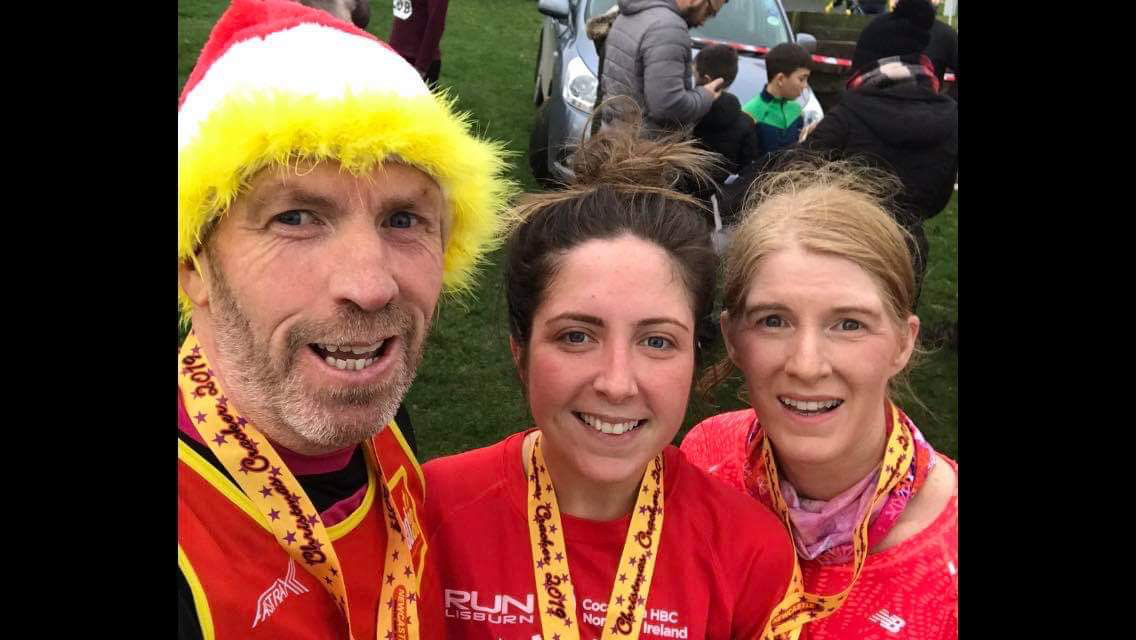 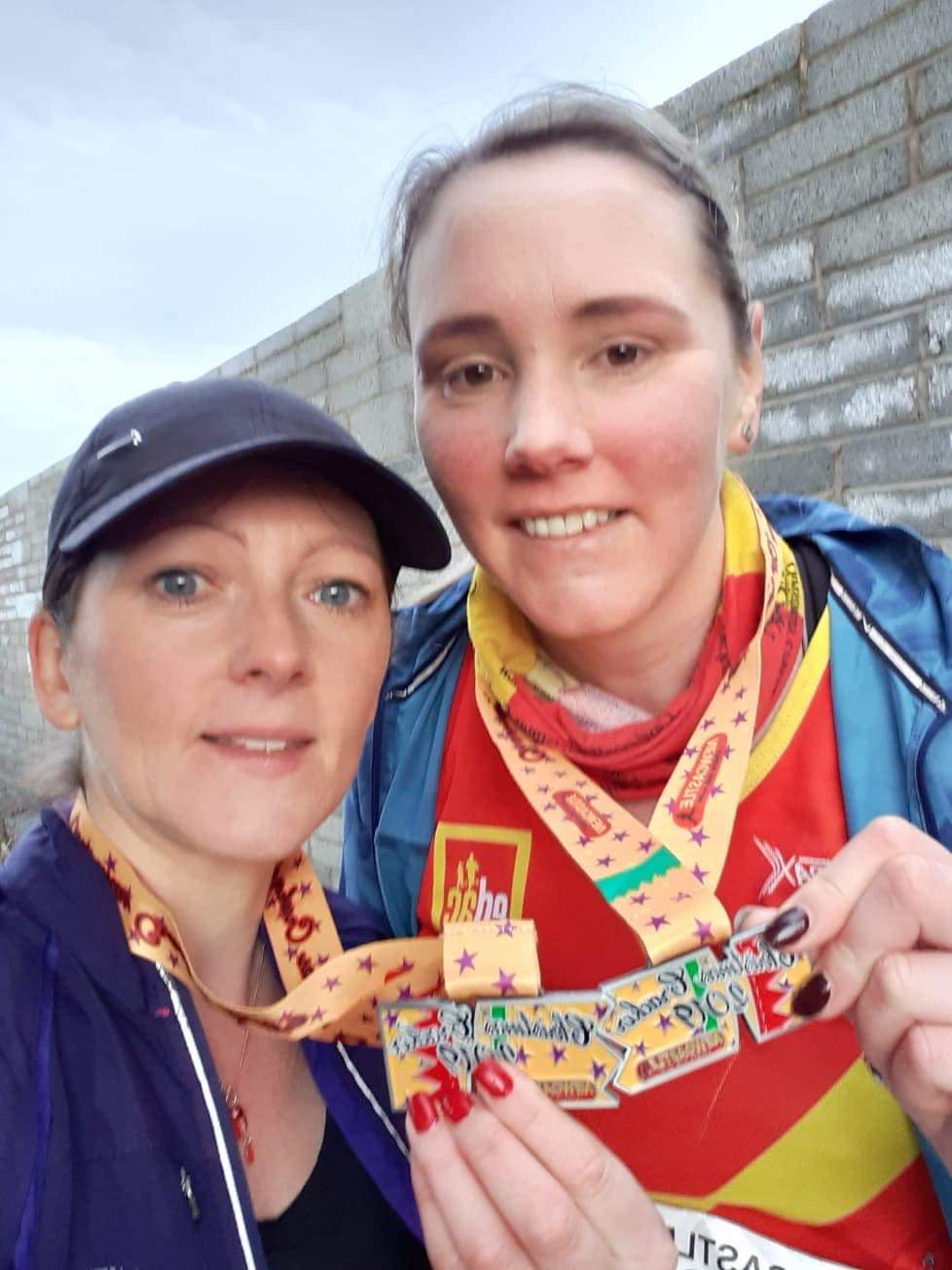 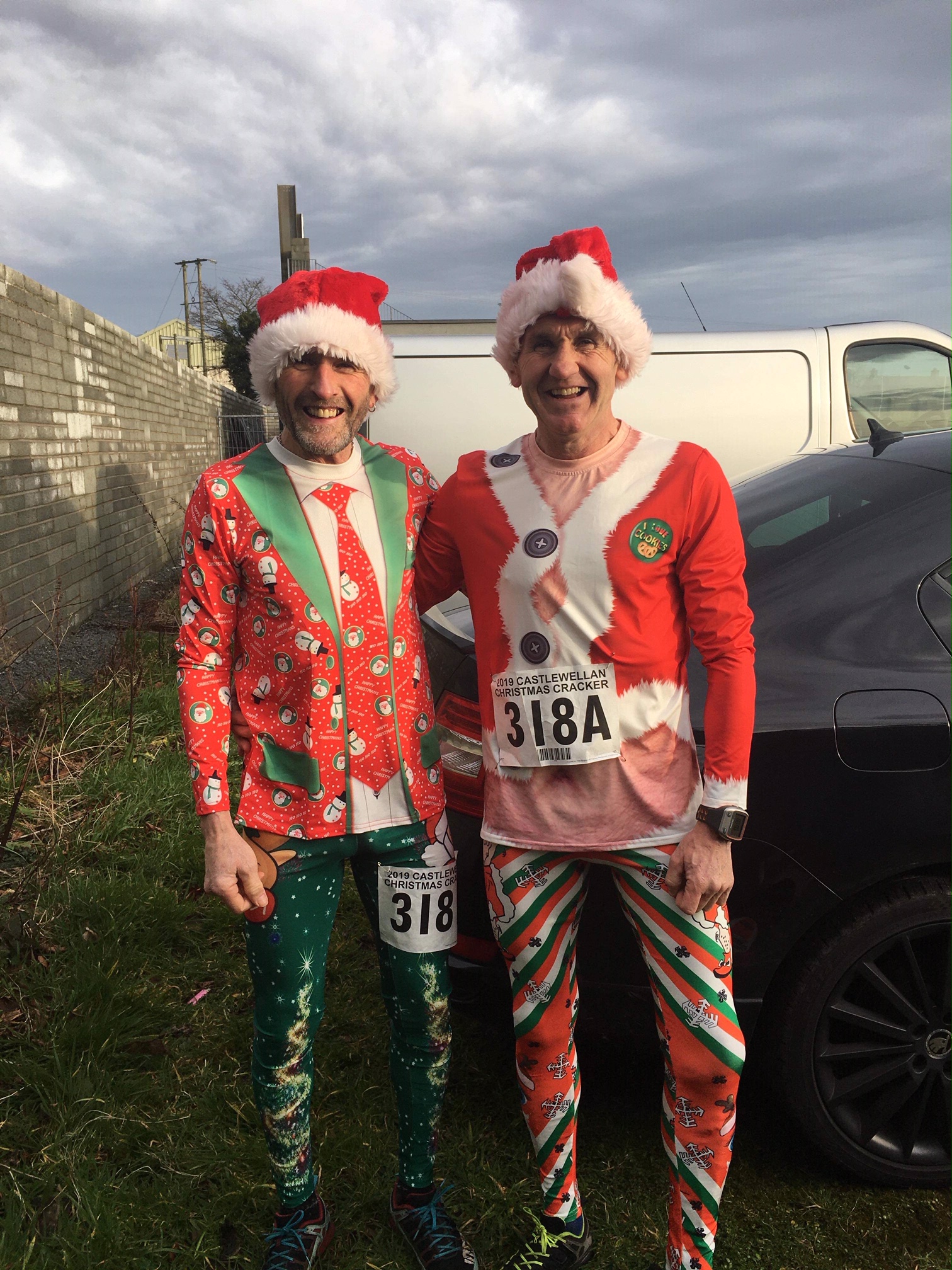 WELL DONE to everyone from the Club who ran as EDAC pairings or as half of another registered Club runner pair or with a friend or family member. It is after all a Fun Event and it was obvious that the majority of participants were in fun filled mode and certainly gave the spectators plenty to laugh at. James Magennis and Cheryl Denvir certainly deserve praise for turning out in fancy dress costumes and Gavin Hynds and Niamh Kellett who won a prize for their appearance as Fred and Wilma Flintstone.

A HAPPY, HEALTHY AND INJURY FREE NEW YEAR TO EVERY RUNNER OUT THERE, IN 2020.