DISTRICTS A SCHOOLS XC CHAMPIONSHIPS 2020
The District A Schools XC was held in Delamont Country Park mid week. Athletes represent their schools as individuals or as members of teams and are doing their best to qualify for the Ulster Schools by coming in the top 15 or as part of the top 3 teams. There was a great turnout especially in the younger age groups and the first races were fast and furious as the shorter distances meant that the runners were tightly packed. With every position counting, the sprint finishes were fierce and the spectators were treated to

exciting viewing. Unfortunately as yet there are no official results but schools will have been informed as to who has qualified.  It is hard to make comment without results and EDAC runners were hard to spot as they were not in club colours but there were many who were in the mix at the top end of their year group and will have got through to the Ulsters as a result of their efforts. This is a great achievement and when we have get results we will publish a list. In the meantime well done to ALL our juniors who turned out.

NOTABLE PERFORMANCES
Mackenzie Murray ran very strongly in the Intermediate Boys (9th place) to get an Ulsters slot for the first time as an individual and Edie Carroll came 6th in the Senior Girls – her last ever Districts having run (and qualified) every year from year 8. 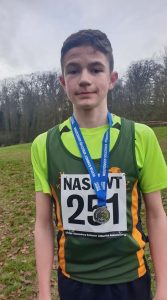 Ollie Robinson provided great excitement when he took on the race from the gun in the Minor Boys. He got a gap and gamely held on through the twists and turns of the course. A late challenge saw him overtaken by the eventual winner but all credit to Ollie for his brave attempt and for his fortitude in digging in to ensure that the precious Silver medal was his. This will be a race that he will remember! 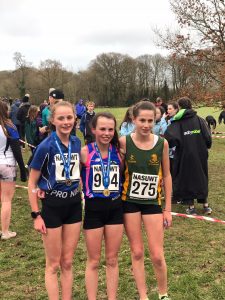 The Junior Girls saw a neck and neck tussle from Lauren Madine and Anna Gardiner. This has become a familiar sight in many events and both are to be congratulated on how they handle the repeated play out of this scenario. Lauren kept us all guessing as Anna managed to get the front step a few times but as they turned to the downhill finish, Lauren squeezed a couple of metres of daylight and then a couple more to cross the line in front and take the Gold, leaving Anna the Silver as fair consolation. Fantastic performances from these podium finishers.

DISTRICT B
A day later the District B XC took place in Ormeau Park and Emily Burns got her place in the Ulsters by taking 6th place on a windswept course. All the Districts will meet at the Ulsters so she will get a chance to battle it out with the other EDAC athletes who have qualified. 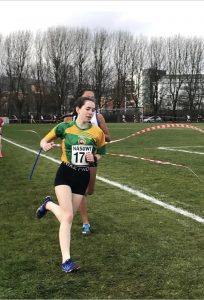 The Antrim Castle Gardens was the setting for the 7th in the Born2Run Run Forest Run Series. Sharon Madine has been a roving reporter on the full set, sending in comments on the scenery and terrain as well as the results. How she has time to notice when she is racing I am not sure but it helps to bring detail to the numbers. Thanks for all the help, Sharon.  In her words, “Beautiful scenery again, with a few turns and bends but overall a flat fast course for the 5K”. She was keen to point out that there were no hills for once. Jimmy Sloan, the winner at the previous Born2Run 5K was back to see how he would fare. He was happy to take the win in 17.26 with 10 seconds to spare over 2nd placed David Conliffe. Anna Gardiner made it a double first for the club when she came home as the winning female in 19.45 (8th place overall). She had a margin of 2 minutes on Ilze Pastare the 2nd lady. Sharon, despite observing her surroundings, managed an impressive 3rd placed female in a time of 22.11. A good day out for the trio. 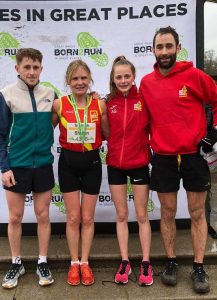 Meanwhile in the 10K there were 593 on the start line. Gordy Graham felt less than well prepared after his night duty as a sheep farmer but gave it a go nonetheless. His lack of sleep kicked in somewhere around midway but he hung on to come third in 34.33. Not a PB by any means but sometimes you can only go with what you have in the legs and it is still a time that many can only dream of. Well done Gordy. 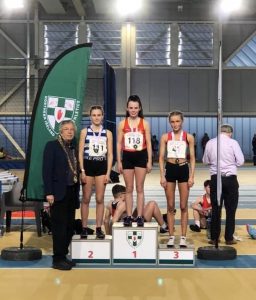 Lauren Madine certainly came of age in the NI and Ulster Indoor Age Group Championships held in National Sports Campus Abbottstown near Dublin over the weekend. She would probably reckon that 800 metres is a little on the short side for her but she has been in cracking form this year and winning regularly, albeit over 5K . However, she took to the “boards” like a duck to water and not only set a new PB 2.16.71 for the distance but took the title by less than one second from her great rival Kirsti Foster, Willowfield, with the 3rdplaced athlete Katie McCleery, City of Lisburn, 7 seconds further back.  Kirsti however turned the tables in the 1500m race on Sunday with Lauren having to settle for the Silver medal, with Katie McCleery again in 3rd place. So a very satisfactory weekend for Lauren who has Gold and Silver medals to show.  Well done Lauren!

ANNA COMES SO CLOSE TO SILVER (and GOLD)!! 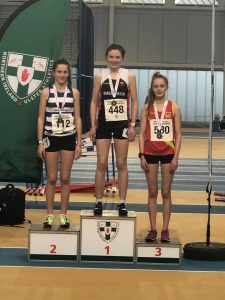 This was a real shot in the arm for the 10 person EDAC squad and on Sunday Anna Gardiner took a superb Bronze medal in the Under 15 Girls 800m race losing out by just over half a second for first and second places. The wining time of 2.24.26 set by Edel Murphy was only just ahead of Lucy Foster 2.24.77 with Anna being  timed at 2.24.79, thus she missed the Silver medal by one fiftieth of a second and a little more for the Gold!

GOOD PERFORMANCES BY ALL THE EAST DOWN SQUAD 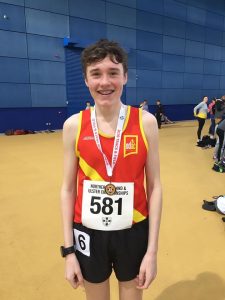 Other notable performances came from Emily Burns who was 11th in the same race and Mackenzie Murray who claimed a Bronze medal in the Under 17 Boys 1500 metres. Aaron Lennon only just failed to qualify for the Under 13 Boys 60m Final, losing out by virtue of having run in a faster heat, though Iona Bunbury qualified for the Under 17 Girls 60m sprint final after missing out on the 60m hurdles. Declan Hampton ran in the Under 17 Boys 60m which was a straight final. Others representing the club with distinction, in very unfamiliar surroundings, were Lucy O’Neill, Anna Kearney and Hannah Lennon, who qualified for the Under 14 Girls 60m final by winning her heat but who was unable to repeat that placing in the final even though she ran it 8 seconds faster! 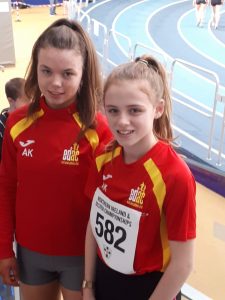 Well Done to everyone concerned and a massive Thank You to all the parents and coaches who travelled to Dublin, some on both days!! 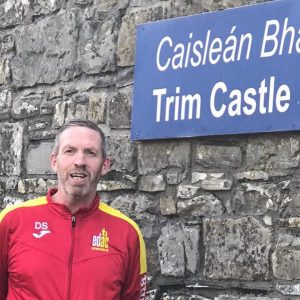 Donal Smith is well known for his love of racing, travelling to new places and his fondness for a goody bag so this weekend must have made him very happy indeed. He headed south of the border for the well attended Trim 10 Mile Road Race along with 1800(!)  runners. In his words the goody bag was, “simply superb and included, (amongst other things), a box of tea bags and a packet of choccy digestives, along with water, lucozade and protein milk”. As if this wasn’t enough, he ran well putting in a negative split to complete in 1 hour 24 minutes. He was using the race as a way of clocking up his miles as he builds towards Belfast Marathon in May. Often runners struggle with the long weekend runs, as mentally they are tough challenges and this is a great way to tick one off so it might worth noting in the diary for future reference. Good luck to Donal as he continues his journey. But lay off the choccy digestives, in fact if it’s any help, I’ll be only too glad to take control of all such dubious items in the run up to the Marathon, purely in the interests of science, of course!!

Talking of journeys and goals – It is worth noting that Jimmy’s 10K and Relay is now 6 weeks away and a perfect goal for those seeking a challenge. With February the nights are not quite so dark and it is an ideal time to think how to spend the extra daylight! A 6 week plan would have you ready to take part in the full course or as part of a Relay Team so sign up at https://online.athleticsni.org/ps/event/JimmysTen2020and get the new month up and running (literally!)

It was with deep regret and  profound shock that I received the news on Wednesday that Nigel Grier, a leading runner of many years standing with Dromore AC, had passed away suddenly. He was a regular participant in Jimmy’s Ten races and performed well in the Co Down 5K Championships organised by Tels Fitness only last November, the last time I saw him. Deepest sympathy is offered to his sister and to all his friends and colleagues at Dromore AC by everyone at East Down AC. RIP Nigel.

Earlier the previous week ended with the sad news that Sonia Kinsella had passed away after a long and courageously fought battle with cancer. Sonia was a lovely person and an inspiration to everyone who was fortunate enough to meet her. This was evidenced by the massive turnout at her funeral in Saul last Tuesday morning, certainly the biggest I have ever seen. She was and will remain, an inspiration to me personally, because she was always so positive in her outlook, even when she knew she had no more hope of recovery. She always made me feel better every time I met and spoke to her but she was so modest about her own status. She probably didn’t realise just how touched we all were by her attitude to life and her stoicism in dealing with her illness.  To quote Saul GAA club vice chair Dr Eddie Harney “She just did things the right way. She was an exceptional person”. This perfectly sums up Sonia.

Now it is up to us now to continue to carry on using the example she set during her all too short life, to make the place we live in a better place for everyone. That I feel would be a fitting legacy for her and one that all of us would certainly settle for, given the choice. The prayers and thoughts of all at East Down AC, where her children were junior members, are with her grieving family, husband Philip, daughter Aisling, son Cathal, her brothers Frank and Barry and her devoted sister, Tracey, who all miss her deeply. RIP Sonia.

The week ended as it had begun, with news of another passing, this time it was of Ben Ward who was the Principal in St Macartan’s Primary School , Loughinisland when I first I began my education.  Yes that’s almost 70 years ago but I and my brother Hugh and many of our peers still remember him fondly from those “best days of our lives”. It is many years since I last saw “Wee Ben” and regrettably I was unable to attend his funeral. However, I do confess to shedding a tear for him and extend to his sons Michael, Aidan, Andrew and Declan and daughter  Angela and to his nephew Benji, a former coach with East Down AC, and the family circle, the sympathy of the entire Club at this saddest of times. RIP