Newcastle & District AC at the Races

The racecourse looked immaculate on Saturday morning as the runners arrived at Down Royal the morning after ‘the races’ (for horses), the evening before, for more ‘races’ (for humans) as part of the ChampionChip Ireland well-organised return to the tarmac, this time over 5k, 10miles and 10k. It had been two weeks since the last races and many Newcastle & District AC athletes were back in search of personals bests and, well, just a race.

Just like on the 22nd of August, it was clear that autumn was upon us with 11C to greet the runners and again blustery conditions – the wind is not the runner’s friend. However, again it was brilliant to see so many personal bests achieved and in one particular case, a landmark time, again testimony to consistent training over many months or indeed years.

First up was the 5km at 10am and two weeks ago, David McNeilly ran a PB of 16:09 and he came back to try and break the 16-minute barrier. He ran a well-paced race and another personal best, 16:06, any PB day is a good PB day, consolidating his improvement and he’ll be back for another go in due course.

Like a fortnight earlier, next clubman home was Niall Goodman who back then had been disappointed with his 16:53 just 3 seconds outside his PB. However, he put that all to right this time taking 9 seconds off his best recording 16:41 – a good step forward.

Soon to be 16 years old, Tom Crudgington whose first love is running in the mountains, ran a PB of 17:23 last time out and today he brought more discipline to his race and was rewarded with a big PB of 17:07, bringing the 17-minute barrier into sight. 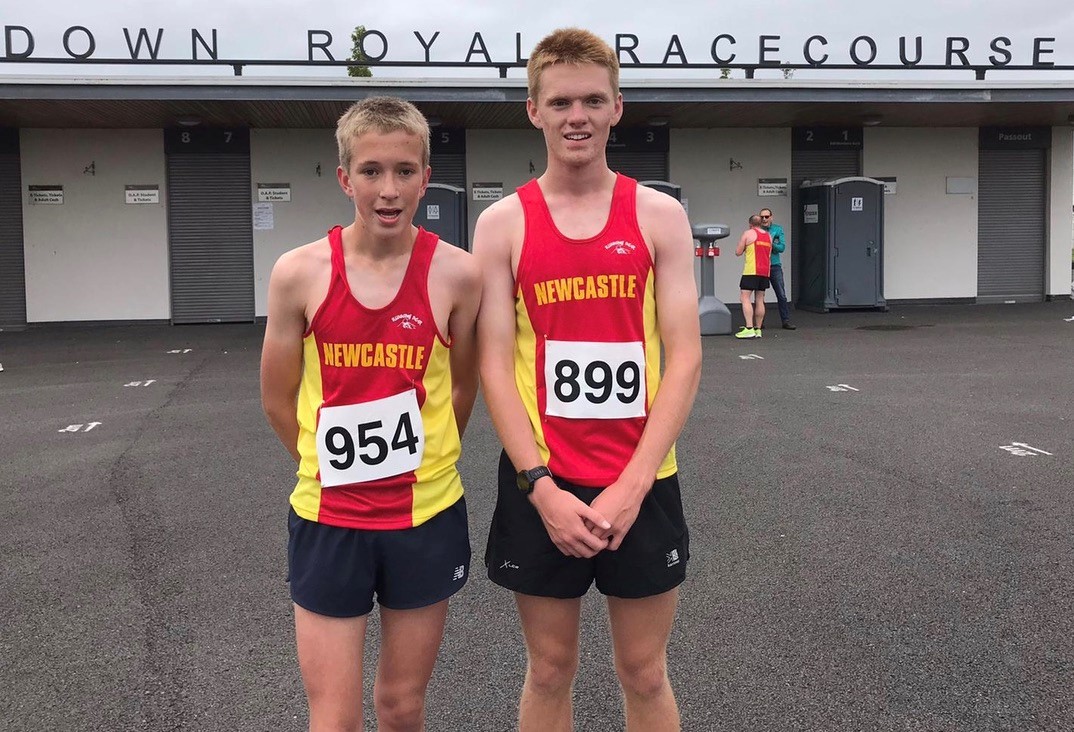 Another man who loves the mountains is Gary McEvoy and only three weeks ago he participated in the toughest of endurance events in Donegal – the Seven Sisters Skyline. It is famed as the toughest mountain racing event in Ireland at 52km long with 4,000m of ascent. Gary had finished in 5 minutes short of 9 hours, with temperatures rising to the mid 20s in the shade and there was very little shade. He describes it as the hardest thing he has ever done. He obviously has great powers of recovery for here he was on the relatively flat Down Royal racecourse where he was more than content to record 17:49.

Two weeks ago, Nichola Watson returned to racing with a solid personal best of 19:44. She decided that she could come back and beat that time this weekend and she demonstrated that her fitness level is improving rapidly with a brilliant 19:19, taking 25 seconds off her PB. Five weeks earlier, Ruby McNiff had been delighted to break 20 minutes for the first time recording 19:53 at Eikon Balmoral. That mark is also now history with another solid run today registering 19:37 and 16 seconds removed from her best.

Gerard McAuley, fondly known to some as simply GMAC, had rediscovered his racing legs with a 42:02 over 10k a fortnight ago. Today, in his words, ‘the chip was his friend’ and he was delighted to record 19:57 – clearly all going in the right direction again. Ashlene Mussen had surprised herself to record 21:23 a fortnight ago but surprised herself even more today by dipping under the 21-minute barrier – 20:56 – brilliant running. 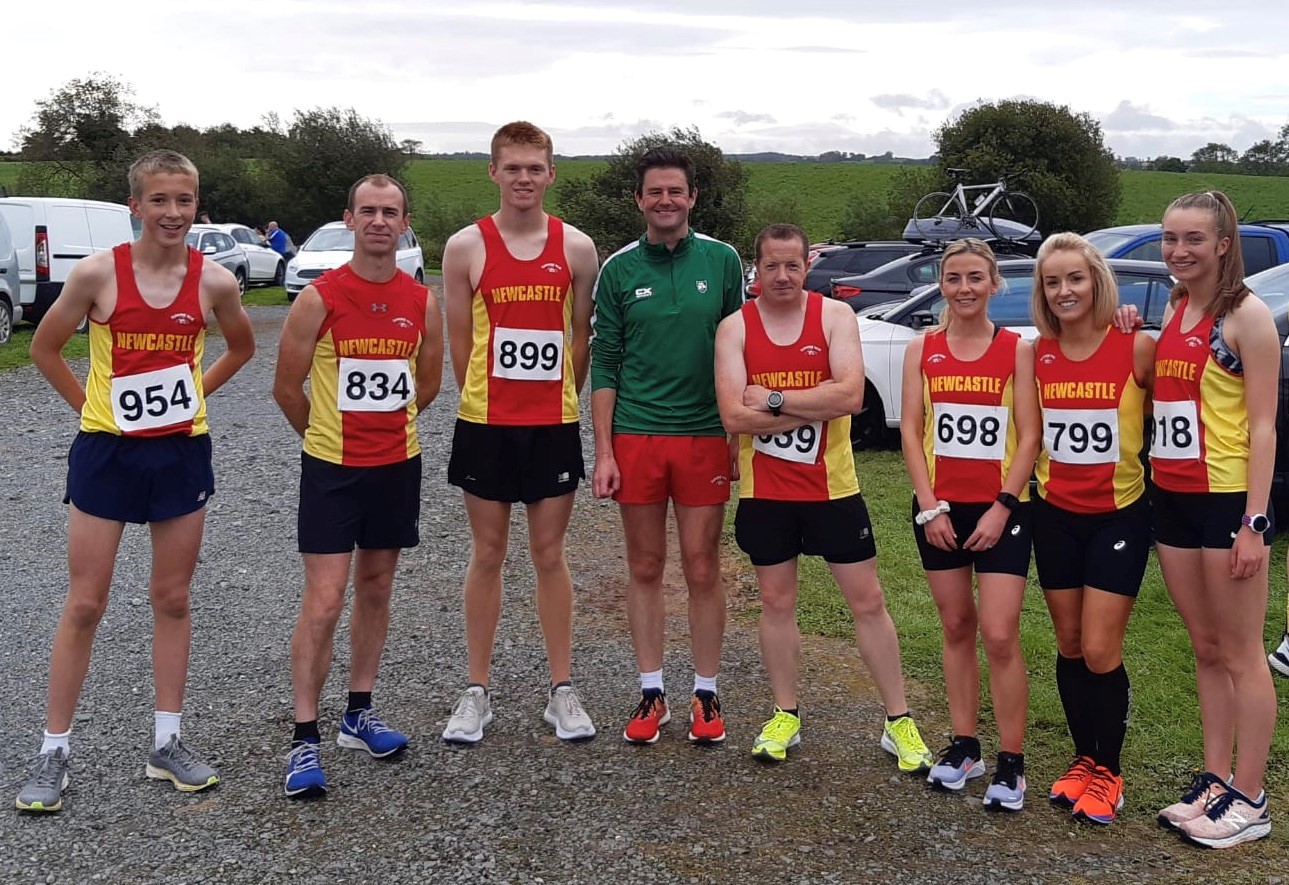 After the 10am 5k start, the race over 10 miles was slated for 11am. Francis Tumelty after recent PBs over 5k culminating in 17:11 two weeks ago, chose to go for 10 miles instead just over 10 days from his 50th birthday – somebody check his birth certificate – 50, really? He ran brilliantly to record a lifetime best of 59:40 dipping under the hour – an early birthday present.

The final race of the day was the 10k. Two weeks ago, Áine Gosling was devastated to record 41:14 for the 10k at the same venue. Husband Paul went straight home and registered her again for the 10k in two weeks’ time – a brilliant move. At 12:30pm, the 10k set off in an even more freshening wind and Paul was on pace making duties. At the end of the short lap all seemed well with 3 full circuits of the racecourse to go. Still moving strongly with 2 laps to go, Gosling was closing on the women in 2nd and 3rd place, Gemma McDonald from Ballycastle Runners and Cathy McCourt. Next time round, Gosling was clear in 2nd place with chaperone Paul having called it a day feeling rough.  As she appeared in front of the grandstand with around 600m to go, would she break the 40-minute barrier for the first time? All those miles around the lake in Castlewellan, at all paces, would be the basis for the gutsy finish that she produced ‘leaving nothing out there’… sprinting down the home straight into the wind she crossed the line in 39 minutes and 57 seconds to do it – what an achievement after the disappointment of a fortnight earlier. Now she can call herself a sub-40minute 10k runner – congratulations. 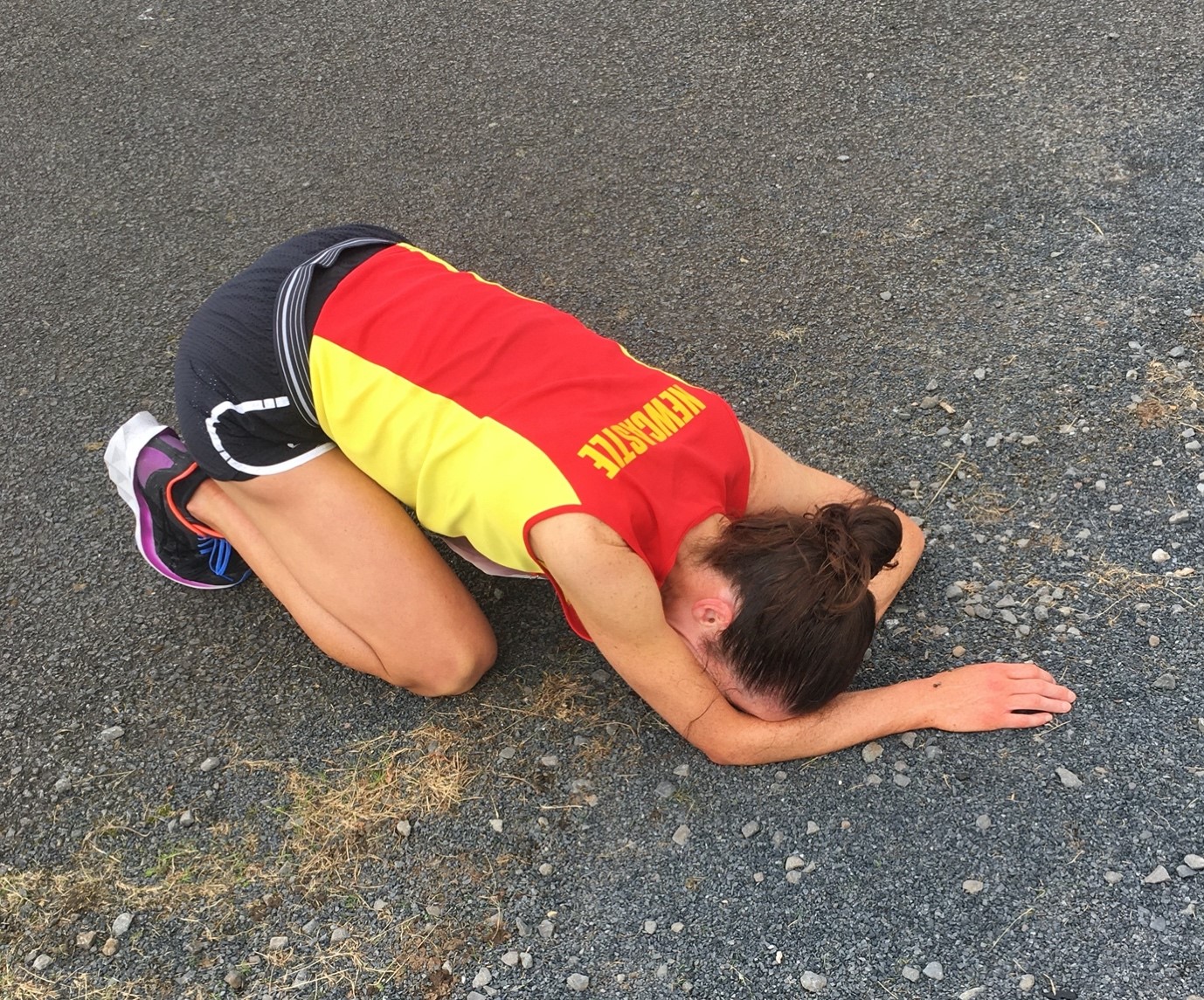 The definition of leaving everything out there – Gosling reflects on the ground shortly after finishing.

Also in the 10k, in a welcome return to racing, was Daniel Molloy. Racing is always a shock to the system after a lengthy break from it and it was great to see him record a solid 35:13 in 5th place overall.