HomeClub NewsBronze is the Colour of the Day at NI &amp...

It’s certainly been an unusual year, exemplified this weekend with the NI & Ulster Track & Field Championships which would normally take place in June, rescheduled for mid-September due to well, no real need to spell out why.

Two Newcastle & District AC athletes made the trip to the Mary Peters Track to compete in respectively the Woman’s & Men’s 5000m. First up was Olympian Kerry O’Flaherty, celebrating, if that’s the right word, one year since foot surgery to insert a screw to facilitate the recovery from a serious 5th metatarsal break caused by an unfortunate racing incident in a steeplechase in the south of Spain.

The broken 5th on the left; the screw inserted on the right to support healing.

O’Flaherty is not quite back to her best form but has made a great recovery since surgery at the back end of February to remove said screw and then being able to get the weekly mileage back up to 70 miles. She’d managed 16:39 for 5000m in a race at the Mary Peters Track some 3 to 4 weeks ago, but today was to be quite tactical in the blustery conditions.

Young upcoming athlete, only 20, Grace Carson from Mid-Ulster set the pace and led for just over 10 laps, keeping the pace honest. She was stalked by O’Flaherty and this season’s best runner over the distance, Nakita Burke from Letterkenny. Burke looked relaxed and adopted brand new tactics of ‘sitting in’ as she tends to like to lead and push hard from the start.

When Burke pushed 800m out, O’Flaherty responded, both moving ahead of Carson, but Burke’s surge was relentless and she pulled away to win comfortably in 16:58.76. Carson clawed her way back and passed O’Flaherty for 2nd place in 17:07.03. O’Flaherty was content with her 3rd place and bronze – 17:13.56 is well off her best, but she’s just glad to be back racing and feeling stronger again.

90 minutes later it was the turn of Eoghan Totten to race over the same distance. From the gun he made his intentions clear as he hit the front to make the pace and try to hurt the others. Totten has had a reasonable 12 months – he set a lifetime best of 2:16:08 at the Dublin Marathon in October 19 and then a half-marathon best in Barcelona of 64:58 in February just before lockdown.

He recorded a gun to tape victory in his first race back of 14:36 on the roads of the Eikon Centre at the Maze. Then he recorded 30:44 for 11th at the National Championships in Dublin a couple of weeks ago, outside his 30:21 PB recorded in London at Parliament Hill Track in July 19.

Totten settled into churning out laps of around 70 seconds, passing 1k in 2:56, 2k in 5:50 (2:54) and 3k in 8:46 (2:56). In the fourth km his pace dropped slightly to a 2:58 (for his slowest km of the race) registering 11:44 with a km to go. His relentless pace had whittled down the starting 17 to just three in the leading bunch. Lisburn’s James Edgar and Annadale’s Neil Johnston were tucked in behind. A couple of times Johnston looked like he was just losing contact, however, he stuck in there and with a lap to go the three were together.

At 350m to go, Johnston pounced and quickly established a 5 metres lead on Edgar with Totten further back. The two guys produced a startling 56 seconds final 400m with Edgar catching Johnston 10 metres from home to win in 14:28.80 with Johnston recording 14:29.77. Totten was rewarded with the bronze in a track PB of 14:41.04 just ahead of North Belfast’s Mark McKinstry (14:42.32) and another PB for Totten’s training partner Mourne Runners Andrew Annett in 5th (14:44.51). 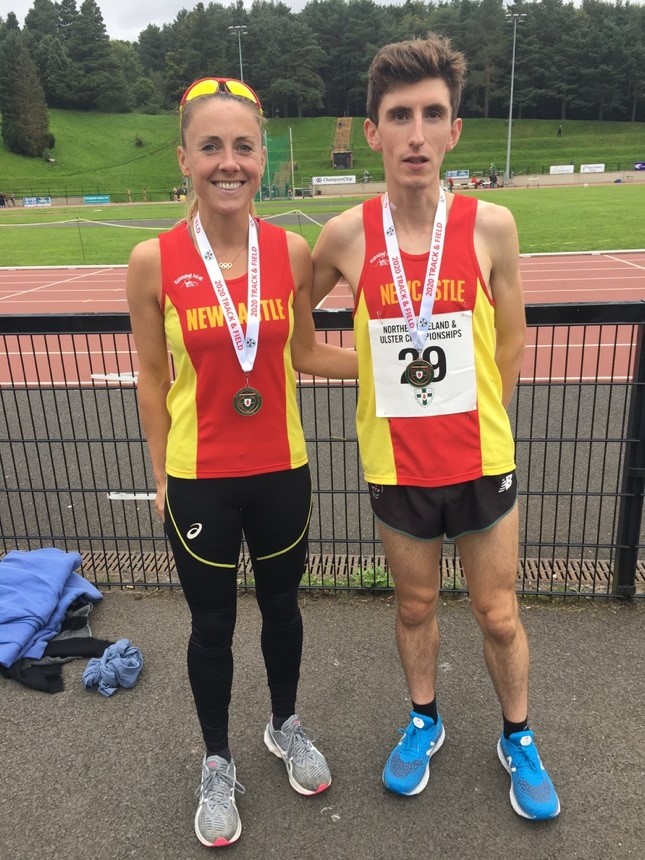