Races have been hard to find since lockdown in March and despite how ‘lonely’ the mountains are and ideally placed for ‘social distancing’ mountain races locally have been few and far between. Last weekend the Mourne Mountain 2-Day took place with a key modification; each team of two had to bring two tents rather than the normal one.

It was a successful weekend with the weather to match and despite it turning colder, much colder for September, blue skies and wonderful sunshine greeted the runners in the 76th Annual Slieve Donard Race in Newcastle on Saturday.

In 1945, the locals came up with the idea of seeing who could be the fastest from sea level to the top of Donard and back. This tradition has been unbroken for 75 years and is currently under the guardianship of Newcastle & District AC. The recent calendar date has been May but that date passed with no race and also the older traditional date of July too. However, the club’s committee was intent of one way or another in getting this year’s race completed.

Club chair, Deon McNeilly, worked tirelessly with the Forestry Commission and thanks to him and understanding forestry officials a permit was granted for 26th September. The compromises were that the race would start and finish at the edge of forestry land at the top of Donard Demesne and that runners would set off in waves of 15. Thanks to the forestry for granting permission and to NIMRA and Athletics Northern Ireland for sanctioning the race.

For a change, we’ll start differently. BARF’s Ian McCullough was born in 1945 and so he is the same age as the race. This year he was on a mission to reach the summit in a number of minutes below his age. 67 minutes and 31 seconds after the start he topped out 2,796 feet above sea level comfortably under his 75 minutes target – congratulations to Ian, who for the record finished 81st and recorded a time of 1 hour 45 minutes and 3 seconds including a 37 minutes and 32 seconds descent from summit to finish line – a brilliant effort. 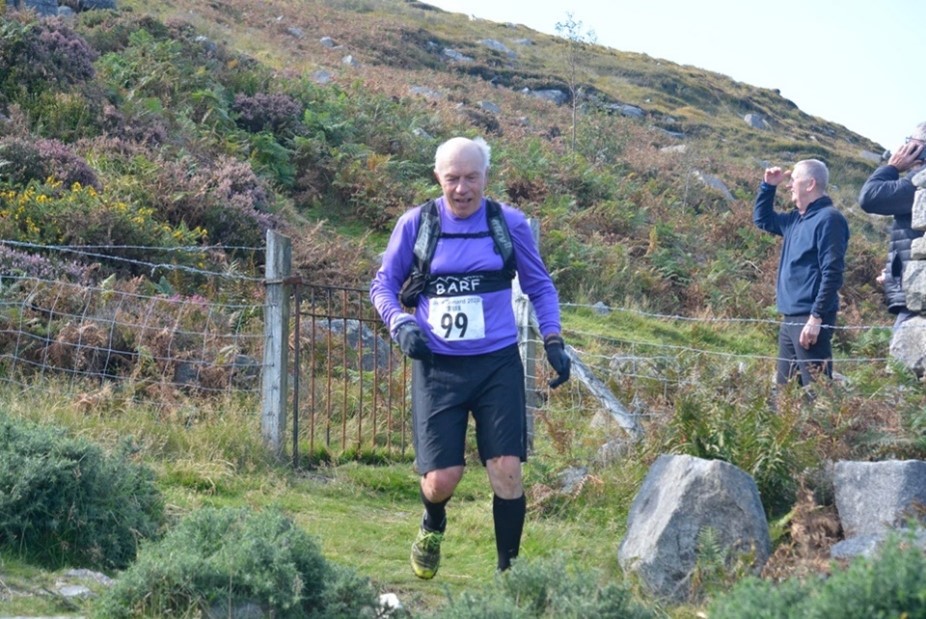 At the sharp end, Timmy Johnston of Mourne Runners recently recorded 15:52 for 5000m at the NI & Ulster Champs at the Mary Peters Track. He set off with real intent pulling away from the field including another pre-race favourite in Newcastle & District AC’s Seamy Lynch. Johnston summited in 35:02 with Lynch 23 seconds adrift. Glen Runners Jonny Steede now over 40 was third to the summit in 36:16 with 16-year-old Tom Crudgington from the local club 4th in an excellent 36:34. 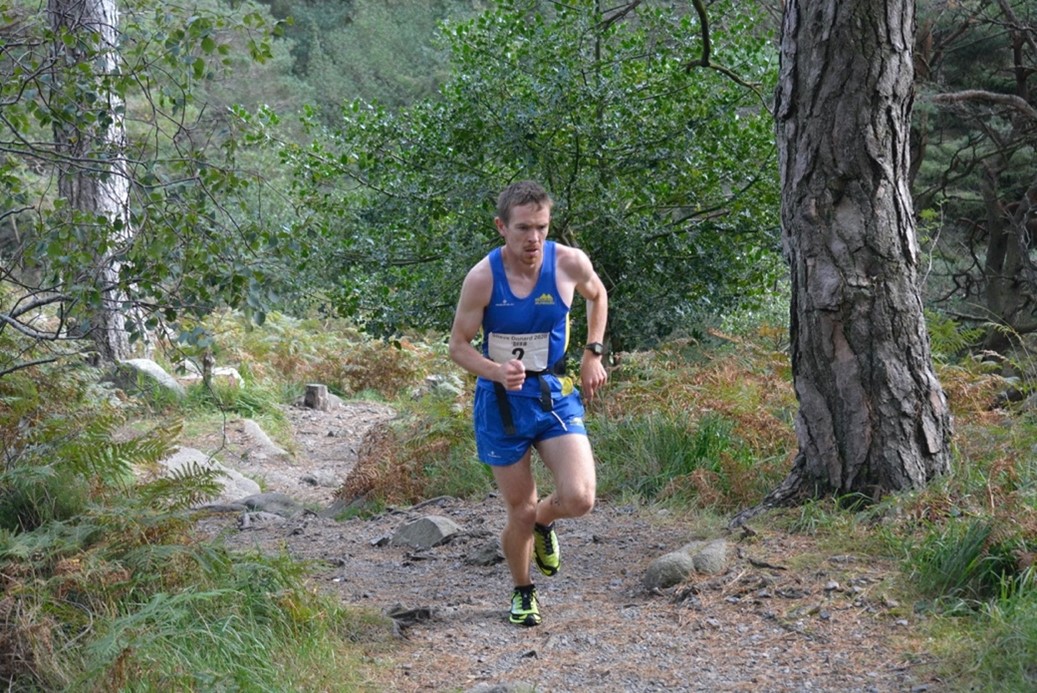 Johnston leads early in the climb

After the summit the runners must descend to the Quarry where there is a checkpoint and arriving there Lynch had overhauled Johnston and led by a couple of seconds. They proceeded the plunge through the forest neck and neck and as they reached the tarmac road into the finish Lynch struck out for home and then Johnston kicked to take the lead and win by 4 seconds in 50 minutes and 31 seconds – his maiden victory in this classic race. A small consolation for Lynch was that his 15:10 descent time the quickest of the day and incredibly quick over the quarry route. 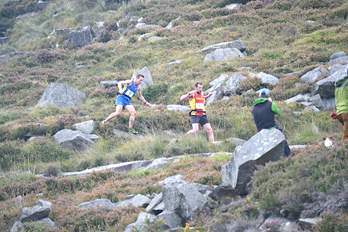 Turning to the women, pre-race favourite was Esther Dickson of Newry AC and she didn’t disappoint. She led from gun to tape reaching the summit in 44 minutes and 28 seconds and she built on here lead with her brilliant descending ability dropping the near 2,800 feet in less than 20 minutes (19:34) to record 64 minutes and 2 seconds, nearly 9 minutes clear of a very tight tussle for 2nd place with Dickson’s club mate Sarah Quinn edging out Jog Lisburn’s Karen Wilton both given the same time of 1:12:58. Wilton had led Quinn by only 4 seconds at the summit so it was a close race all the way. 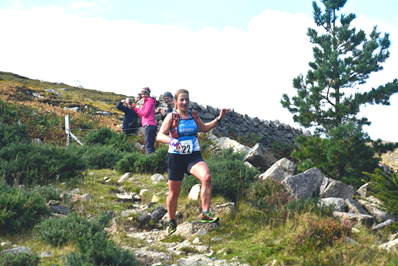 Dickson flying towards the Quarry with massive lead