Since some club members ventured to Down Royal on 22 August for the ChampionChip Ireland series of road races coming out of lockdown there has been one common theme – autumn has been upon us. 7 weeks further on, the day was definitely autumnal with strong gusty winds, rain and the temperature not yet reaching 10C – but that didn’t stop some stalwarts putting their run of consistent training to the test. 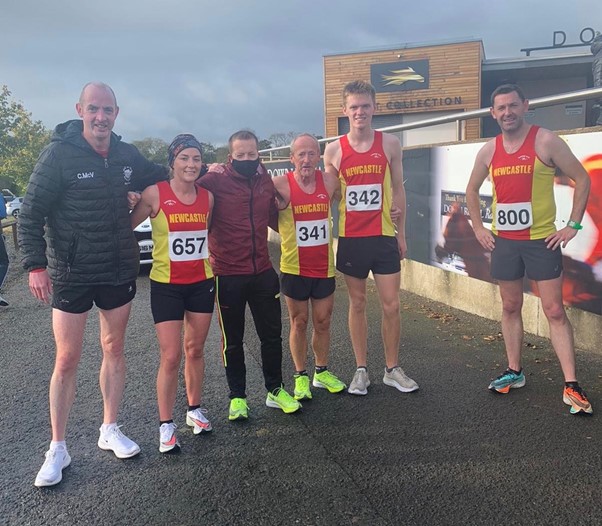 First up was the 5km with some back to try and improve on their recent performances and others putting themselves to their first test since lockdown.

Connaire McVeigh was a promising junior and produced a lot of good racing into his 20s and now he has turned 40 he has been contemplating ‘releasing the beast’ again and moving his running onto a different and higher level. Today he achieved that, coming home in 16 minutes and 26 seconds a massive 26 seconds inside his personal best – congratulations.

Just behind McVeigh and having the race of his short life was Niall Goodman, having registered a personal best 16:41 last time out, Goodman is only 17 and is progressing quickly over the weeks. Today he set another personal best of 16:31 – great running and both he and McVeigh will now be contemplating breaking 16 minutes for 5k after another sensible block of training.

Frank Cunningham was the next club man home. Fresh from his personal bests over 10km a few weeks ago, Cunningham has been training consistently and turned his attention to trying to run a 5k personal best. He achieved that with a very good 17:26 clocking to take 31 seconds off his previous best – congratulations to him too – and much more to come.

Ashlene Mussen has been on a steep improvement curve since returning first to running post the birth of Rónán and then to racing – and it’s only been seven months. She recorded 21:23 five weeks ago and then breaking the 21-minute barrier – 20:56, three weeks ago. Today she ran even better, clocking a sub-20 minutes time of 19:51 – more than a minute off her recent best and, shocking herself but not many others with a lifetime best – 2 seconds off her best ever done ‘before Rónán’ – congratulations, brilliant running.

Ernie Hall was making his first appearance in this strange road racing season and said afterwards that he didn’t enjoy it but ran a solid 20:49 – great to see him back racing. 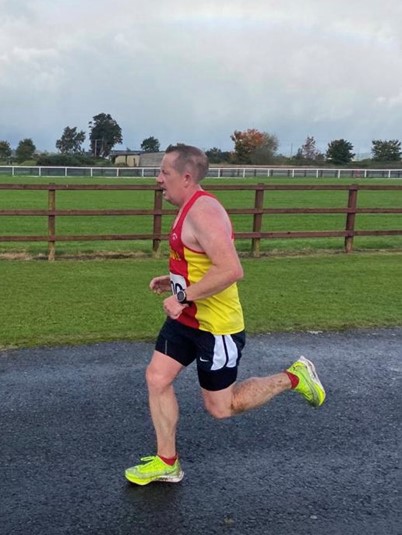 Gerard McAuley, as mentioned before, fondly known to some as simply GMAC, had rediscovered his racing legs with a 42:02 over 10k and 19:57 over 5k (three weeks ago). Today, he decided to put the legs to a half-marathon test, despite the difficult conditions and came home in 93 minutes and 30 seconds – he was a little disappointed with his efforts, but nonetheless is was a very solid performance.

Five weeks ago, Nichola Watson returned to racing with a solid personal best of 19:44. She came back a fortnight later and beat that time with a brilliant 19:19, taking 25 seconds off her PB. This weekend she decided it was time to re-write her 10km PB and try and go under 40 minutes for the first time. As already described above the weather was not helpful and as the 1:30pm start time drew near she was resigned to getting soaked to the skin on her ‘so-called’ warm-up.

She needn’t have worried for she smashed the target coming home 3rd woman in a massive new PB of 39:35 – congratulations and so much more to come.