Trofeo Vanoni is a traditional late Autumn ‘end of season’ mountain relay race where each leg starts and finishes in Morbegno, Sondrio in the Lombardy Region of northern Italy. Over the years it has maintained a strong link with the Snowdon Race, welcoming a team selected from the front end of that race which typically takes place back in July.

Unsurprisingly, this year is different, no Snowdon Race and no Snowdon team at Vanoni. However, 25-year-old Zak Hanna, a Salomon and Newcastle & District AC athlete from the slopes of Slieve Croob was introduced to the Vanoni in 2016, when still a novice to mountain racing, he was invited to travel as part of an Irish team. He helped the team to 11th overall out of 143. Personally, he recorded 32:38 for his leg, 24th fastest and with 21:35 for the climb (12th fastest) and 11:03 for the descent.

Hanna was hooked, he loved the atmosphere, the buzz in the village set amongst the towering mountains and the love for mountain racing oozing out of everyone he met. He didn’t make it back in 2017, but in 2018 after a superb Snowdon Race in July he was invited as part of the ‘Snowdon select’ and helped the team to a great 2nd place behind a strong French team and ahead of the top Italians. It was a wet day and times were slower but he still managed an improvement of 32 seconds from a couple of years earlier and 13th fastest overall (32:06 with the 9th fastest climb of 21:42).

He was back again last year again as part of the Snowdon select team and he helped them to 6th place out of 150 teams. His time of 31:04 (over a minute inside his best from 2018) was good enough for 11th fastest and his climb time of 20:49 was 5th fastest on the day. The legendary John Lenihan racing back in the 80s was the only other Irishman to ever get below 21 minutes for the climb, which underlined Hanna’s potential for the future. Lenihan’s time from 1986 of 29:35 is the 23rd fastest ever in the race – so that is currently the difference between Hanna and Ireland’s best ever.

So for 2020, the 63rd version of this famous mountain relay, he was keen to head back, despite the COVID restrictions. His three sorties to Italy this summer and early autumn and demonstrated to him that it was relatively safe to make the trip and the organisers had helpfully published well in advance the COVID protocol under which the whole weekend would operate. Following a negative COVID test he landed, ready for action, in Milan Bergamo on Thursday morning.

This year he was teaming up with World Cup Series winner from 2019, Scot Andy Douglas (on leg 1) and Yorkshireman Ben Mounsey (on leg 3). Yorkshire has left its imprint on the Vanoni with Ian Holmes holding the descent record with an incredible 8:37 – anyone from this part of the world might remember Holmes fearless sprint down the front of Slieve Donard over the Black Stairs (having never seen the route before) and down into Donard Park at sea level (2,796 feet decent over very rough ground) in just around 12 minutes. 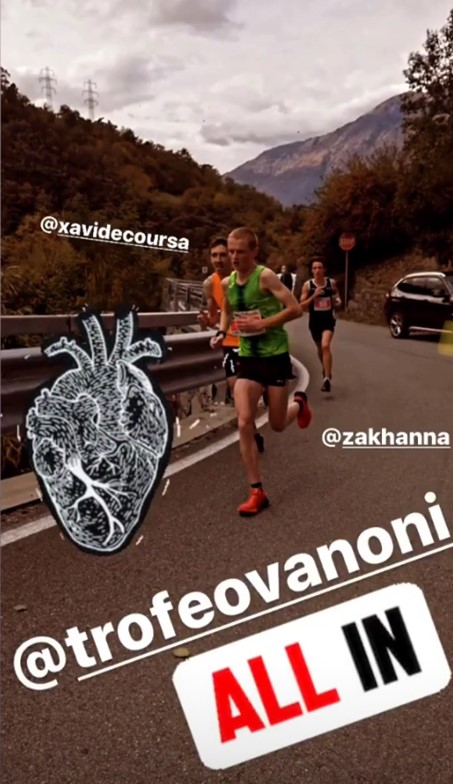 How an Italian local sees the effort…

After a very wet Friday, when by pure coincidence Hanna, as an ex-junior cyclist, had the joy of watching the Giro d’Italia rolling out from Morbegno in the driving rain, the weekend brought gorgeous late autumn weather. In the women’s relay in the morning, Irishwoman Sarah McCormack, winner of the Kilometro Verticale Lagunc a fortnight earlier, had another superb run, registering not only the fastest leg of the day but also setting a new record of 21:07, 28 seconds ahead of local favourite, Elisa Sortini.

Scot Andy Douglas had an excellent run on the first leg coming home in 30:40.2, in 4th place overall. Hanna too had another excellent run, losing one place and gaining one place to hand over still in 4th place and recording 30:41.6, just over a second off Douglas’ time and a 22 second improvement on 2019. Mounsey recorded 34:12 but only lost one place to bring the team home in 5th behind a rampant French victory. 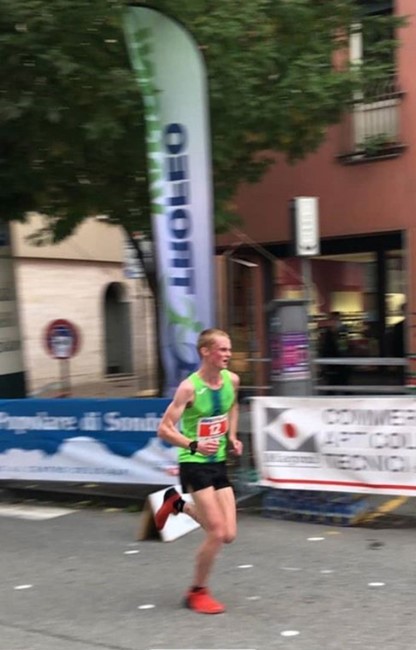 Deep in hurt locker in the home straight

A deeper look into the results –https://www.sportdimontagna.com/sites/default/files/download/VANONI%20UOMINI.pdf – shows that whilst Hanna recorded the 11th fastest time of the day overall, his climb time of 20:30 was 3rd fastest on the day, taking the scalps of so many great mountain runners such as Italians Vender, Chevrier, Maestri and Baldaccini, Slovenian Becan, the French Rancon, Seb Fine and even team mate Douglas (21:16). Ascent times have been recorded since 2005 and in the past 16 editions he is now ranked the 22nd fastest climb – great progress. It’s also worth pointing out that from these islands only Scotland’s Robbie Simpson (at 20:09) has achieved a faster climb over the past 15 years.

So Hanna continues his steady progress – the numbers don’t lie – he’s another 1.2% faster than 12 months ago (1.5% faster on the climb) and he’s 6% better than his first outing 4 years ago. It takes a lot of hard work – consistent hard work – but at 25 he has many years of improvement left in him and he is not far off the best in the world even now.  He looks back at the history of this race and sees that he is 67 seconds (3.6%) behind the legend John Lenihan, the best mountain runner Ireland ever produced – how long will it take him to surpass him?