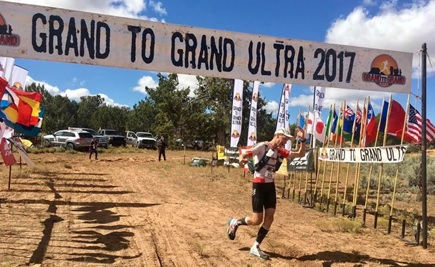 The Grand to Grand Ultra started on Saturday 23rd September 2017 on the rim of the Grand Canyon at an altitude of 5344 feet from where; over the next seven days runners would cover 170 miles (273km) in six stages.

The course would lead them through a mix of terrains, including hard packed sand, soft sand, sand dunes, forest trails, red rock climbs, rocky roads and slot canyons to the eventual finish on the summit of the Pink Cliffs of the Grand Staircase at an altitude of 8698 feet.

With the organisers providing only tent and water, participants had to carry all the equipment and clothing and food they needed to be self sufficient for the seven days meaning having to deal with heavy backpacks as well as the environmental conditions.

Stage one started on the rim of the Grand Canyon at 8.00am on Saturday 23rd September with the runners having to cover 30.8 miles on dry dirt trail, roads, brush and fields to their second campsite.  The first stage results were to set the pattern for the event with former World Trail Champion, Erik Clavery the first to complete the stage in 4:23:50.  In second was Limavady man, and Springwell RC member Peter Cromie who finished in 4:44:12. Of the 119 runners who started the race 118 completed stage one.

Stage 2 saw the runners gain some altitude running through the Juniper trees in the Kaibab National Forest covering the 26.9 mile stage to their third campsite.  Towards the end, runners got their first taste of the ultra-soft sand that would challenge them for much of the remainder of the course.  Erik was again first to finish the stage taking 4:20:16 (8:44:06) with Peter again second in a time of 4:49:27 (9:33:39). Four runners didn’t finish this stage and withdrew from the race.

After a day to recover, Stage 4 presented the remaining runners with 26.0 miles through Zion National Park, running the last miles of the stage through the stunning slot canyons.  Erik and Peter continued their excellent performance of the earlier stages once again finishing first, 4:13:29 (24:22:29) and second 4:21:53 (26:41:24).  Three more competitors failed to finish the stage leaving 92 still running.

Stage 6 was a modest 7.7 miles, but don’t think that just because it was near the end that it was getting any easier. With over 160 miles already covered the remaining 7.7 miles were a 2,000 feet ascent on a single track road through alpine forest to the top of the Grand Staircase, with views overlooking the Pink Cliffs to provide those who finished with panoramic views of much of the course.  Erik continued his dominance of the event, once again leading the field home in 1:11:40 with Peter second in 1:18:11.  Once again the 92 competitors who started completed the stage.

The overall positions were in no doubt, with six stage wins out of six, Erik Clavery won overall in a time of 29:34:16 (1st place), similarly with six second places out of six, Northern Ireland man Peter finished in 2nd place in 32:17:59.

The Grand to Grand Ultra event has been described as one of the most challenging multi-stage endurance events in the world and this year’s field of competitors has consisted of former World Trial Champions, Ironman Champions and other World Class Endurance athletes.  Peter Cromie has been competing at the very highest level and his result deserves the highest praise.