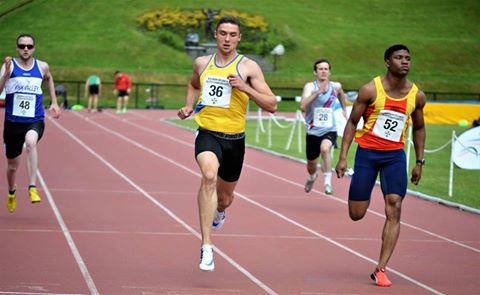 The performances of local athletes created a weekend of athletics to remember, with medals at the Para Athletics World Championships, the Commonwealth Youth Games in the Bahamas and a new Northern Ireland record at the European Athletics Under 20 Championships in Italy.

The outstanding performances of Aaron Sexton (North Down AC / Roger Sexton) and Sommer Lecky (Finn Valley AC / Niall Wilkinson) at the Commonwealth Youth Games in the Bahamas crowned off an epic weekend.

The talented duo both claimed gold on what was a ‘Super Sunday’ for Northern Ireland athletes.  NI & Ulster Senior Champion Sommer again bettered the Commonwealth Games standard of 1.82m when she jumped to 1.83m to seal 1st place in the High Jump.

Anna McCauley (City of Lisburn AC / Maureen McCauley & Tom Reynolds) also performed well in her first major international competition, missing a spot in the 100m hurdles final by just one place when recording her third fastest time ever, 14.26. Beechmount Harriers’ Davicia Patterson (Paul Magee) reached the 400m final with a 55.54 finish in the heats – the NI & Ulster Senior 400m medallist then ran 55.86 for 8th place in the final.

It proved to be a successful Championships for local athletes, with Jason Smyth (Derry Track Club) picking up gold medals in the T13 100m and 200m events and James Hamilton (Ballymena Runners / Mark Kirk) also impressing in the T20 800m and 1500m, where he finished sixth in both events – this included a 1:59.40 personal best over 800m.

During an interview with Athletics Ireland, Kate explained, “I’m delighted with how everything went.  Day one was better than I wanted it to be, it was great, and today I had steady performances all day.  To finish with 5,700 is just unbelievable.  I just want to thank everyone for their support and everything at home.”

City of Lisburn AC’s James Edgar (Heather Ardis) was in action over 5,000m, where he narrowly missed a top ten placing when clocking 15:39.22 for 11th place.

Note:  Story compiled for use by Athletics NI.