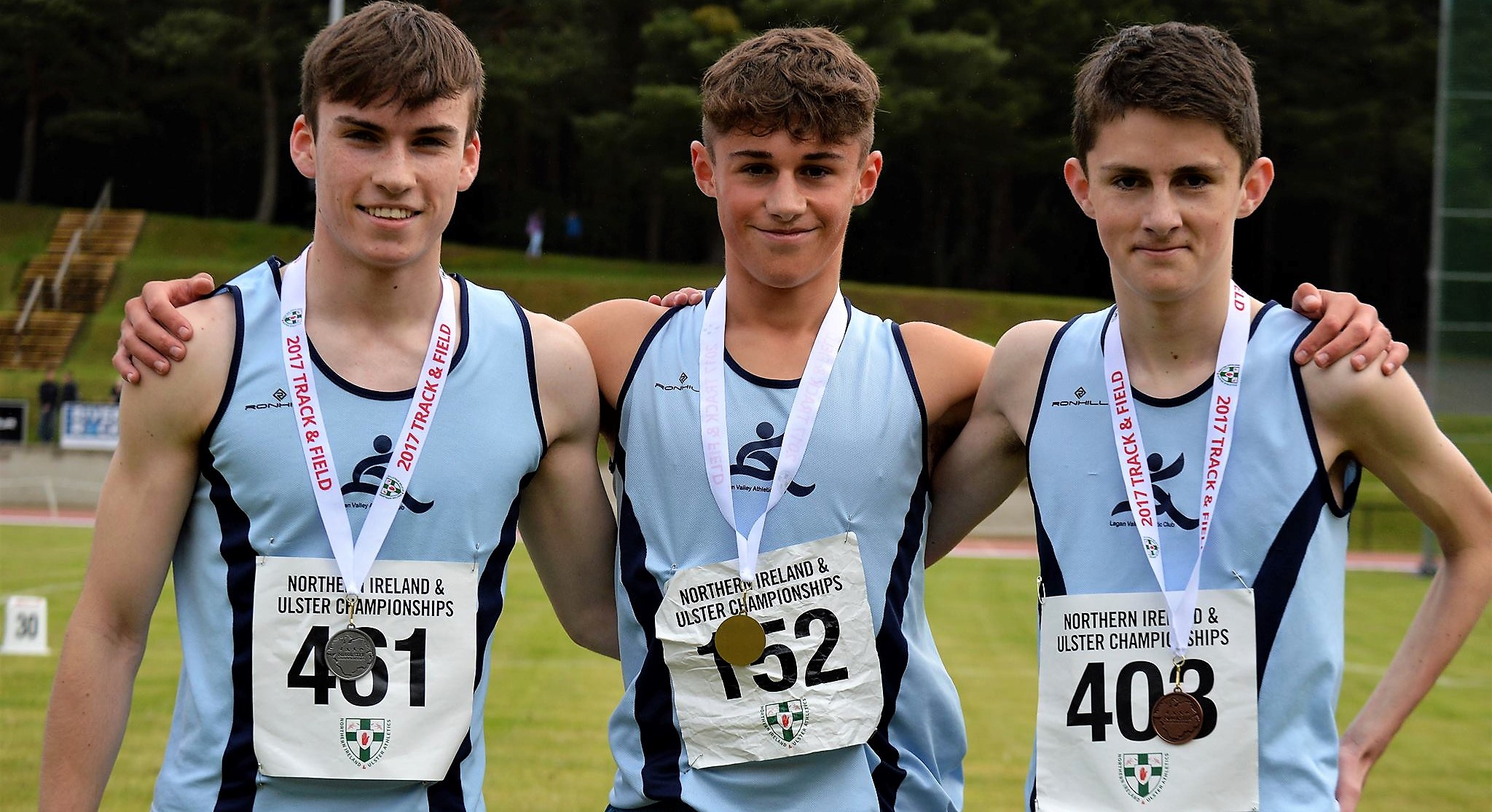 Comber 10k and NI & Ulster Age Group Championships take centre stage:
After a hugely successful weekend of running last week, both on home shores with the NI & Ulster Senior Track & Field Championships and further afield with some excellent displays from local athletes outside NI, it’s time to look ahead to another exciting few days of action.

This coming weekend will bring the brilliant Comber 10k and also another important track fixture, the NI & Ulster Age Group Championships. Of course, there are several other events taking place, which we will highlight, but these will form the basis of our preview.

Comber 10k Road Race:
The weekend action kicks off tonight (Friday 16th June 2017) with the Comber 10k road race in County Down. The event is in its third year and this will be the second year of the new flat and fast course.  The race is the eight round of the ongoing Novosco 10k Grand Prix.

A record entry of approximately 700 athletes is expected and organisers have therefore advised competitors to arrive early for the 7.30pm start – please also be advised that on the night entries will close at 7pm sharp.

Weather conditions look almost perfect and within the last 48 hours, hosts Ballydrain Harriers have increased the prize-fund to offer an added incentive of £50 to both male and female athletes if they break the course records of 32:16 (Ben Branagh 2016) and 36:53 (Joasia Zakrzewski 2016); it must be noted that these were set in less than ideal windy and wet conditions.

At the sharp end, reigning Champion Ben Branagh (St Malachy’s AC) will prove hard to beat – after setting the 32:16 course record here twelve months ago, Ben has gone on to reduce is 10k personal best to 31:33. This means the course record and associate bonus are there for the taking should he return!

North Down AC’s Francis Marsh and Victoria Park & Connswater AC’s John Craig, the fourth and fifth place finishers in 2016, could also return and will be hoping to make it onto the podium if they do. In terms of almost certain starters, Les Jones 10k podium finisher Ben Morrow (Ballymena Runners) and going by his 34:27 over that course, he’s more than capable of dropping well into the 33 minute finish time. East Down AC’s Barrie Atkinson will also play a prominent part at the front and he may well have experienced athlete Paul Rowan (Willowfield Harriers) for company.

Ladies record holder Joasia Zakrzewski (Dumfries RC) is unlikely to return as she was in action for Great Britain at the IAU World Ultra-Trail Championships in Italy last weekend.

Last year’s third place finisher Amy Bulman (Willowfield Harriers) may make use of the on the night entry system. It’s hard to look past the ever-improving athlete as a potential winner based on her recent form which includes a 17:40 over 5k and an excellent 36:22 for victory at the Runher Coastal Challenge. Susan Smyth (Dromore AC) will hope to continue a recent run of good form which includes wins at the Bann 10k (41:05) and the Craigavon Lakes 10k (39:38), while sister Hazel Smyth (Dumfries RC) will be hoping to dip under the 40 minute mark, which should secure a podium spot.

NI & Ulster Age Group Track & Field Championships 2017:
On Saturday 17th June 2017, at least six All Ireland Champions will be in competition at this weekend’s Northern Ireland & Ulster U14, U15, U16 and U17 Age Group Championships, which will be held at the Mary Peters Track in Belfast.

A day of excellent competition lies ahead as the Province’s top up and coming talent battle it out for medals. A timetable for the event can be found HERE.

Dylan McBride will line up in his favourite 800m event as well as the 200m. The Under 15 Willowfield Harriers athlete clocked an impressive 2:06.55 to win the Irish Schools 800m title two weeks ago. Dylan will face Joseph Haynes (Armagh AC), the man who beat him by the narrowest of margins over 1500m at MPT last week and Odhran Hamilton (Armagh AC), who he beat to claim the Schools title.

Under 17 athlete Anna McCauley will compete in three events, the High Jump, 100m and 100m hurdles, and based on recent form, the City of Lisburn AC star could medal in all three. There will of course be a level of expectation around Anna’s High Jump event following her 1.65m leap to win the recent All Ireland Schools competition.

Ballymena & Antrim AC’s Jonathan Cochrane will also have a busy day, with three events to look forward to. Under 17 competitor Jonathan will compete in the 100m for the first time this season, whilst taking on his regular jumps events, the Long Jump and the Triple Jump; he excelled with an 11.54m Triple Jump effort to take gold in Tullamore earlier this month.

Under 17 ladies Iona McPerson and Jade Williams will prove hard to beat in their respective field events. Iona will be competing in the Triple Jump and is sure to start as favourite when taking into consideration her huge step up in performance this year – the City of Lisburn AC athlete went over 11 metres for the first time this season, recording her current best of 11.28m at the Ulster Schools. Jade will be throwing the Hammer and will be hoping to get close to, or better, her current best of 59.09m; she set this at the All Ireland Schools in 2016.

Another Under 17 athlete, Cormac O’Rourke, will race over 400m and 800m, and with 55.76 and 1:57.43 personal bests over the respective distances, he is sure to be considered as a strong contender for gold.

There will be wealth of athletic talent in action at the event, with Irish Schools (Minor) 800m record holder and silver medallist Victoria Lightbody (City of Lisburn AC) just one of a huge number of athletes to look out for.
Rebecca Wallace (North Belfast Harriers) and Katie Agnew (Ballymena & Antrim AC) will feature in the Under 16 Girls 3,000m race, while Tir Chonaill AC’s Mia McCalmont will be in action in the Under 17 Girls equivalent. Lagan Valley AC club mates Alex Boyd and Peter Carty will resume battle in the Under 17 Boys 3,000m following their exciting contest alongside club mate Cormac O’Rourke over 1500m at MPT last week.

Luke O’Sullivan (Shercock AC) will compete in the Under 16 Boys 800m after dominating the Under 16 1500m race at MPT last weekend. Murphy Miller (North Down AC) will toe the line for the Under 16 Girls 800m, while Eimear McBrien (Lagan Valley AC) and Cara Laverty (City of Derry AC) will be part of massive Under 15 Girls 800m competition. Under 14 Boys Oisin Kelly (Cranford AC) and Joel Chambers (Ballydrain Harriers) will go head-to-head over 800m after enjoying an exciting 1500m dual seven days ago.

Other events taking place in Northern Ireland this weekend:

Parkrun:
As always, Northern Ireland’s twenty four parkrun events will take place this weekend, for more information on these, or to locate your nearest event, please visit our dedicated ‘parkrun’ section within our fixtures page.