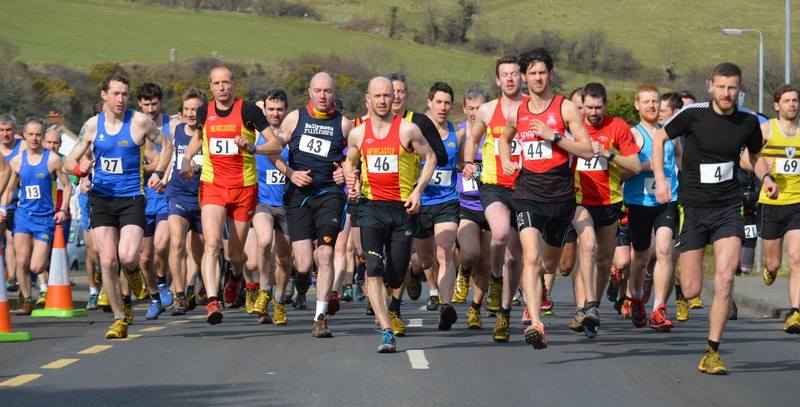 Following the postponement of most of last weekend’s events, the next few days are set to be action packed, with numerous high profile events taking place.

Locally, the Glenariffe Mountain Race and the SSE Airtricity 10 mile Road Race are the pick of the bunch.  Further afield, a Northern Ireland & Ulster team will aim for glory at the UK Inter-Counties XC in Loughborough and hundreds of familiar faces are expected to travel to Athlone for the AAI National Masters Indoor Track & Field Championships.

Where do we start – lets go for local… and the mountains!

On Saturday 10th March 2018, nearly 200 athletes from across the province will descend on the coastal village of Waterfoot for the opening race of the Northern Ireland Mountain Running Association (NIMRA) Championship, the Glenariffe Mountain Race.

Affectionately known as ‘the Potato race’, or ‘the Spud run’, because of the goodie bag consisting of potatoes; yes, a full bag of potatoes (from race sponsors, Glens of Antrim Potatoes), the race attracts runners from all corners of Northern Ireland, and beyond!

The ‘to the top and back’ course measures approximately 5.9 miles in distance, with 370 metres of ascent and with the initial flat and fast 2 mile section along the Glen River, which doubles up as the final 2 miles of the race, it makes this course suitable for everyone.

In saying this, nothing can be taken away from the task runner’s face on race day, given the fact that much of the 370 metres of ascent is packed into one climb, which measures just under a mile in distance – it’s steep!

In previous years, the trail and road runners have led the field out, before the mountain ‘goats’ take charge as the competitors move onto the steep and continuous climb up the Glen.

Mourne Runners man William McKee will return and will be looking for a hat-trick of victories having won in 2016 and 2017.  However, the Kilkeel man will face some top class opposition in the form of Seamus Lynch (Newcastle AC), Zak Hanna (Newcastle AC), Allan Bogle (City of Derry AC) and Ryan Stewart (Shettleston Harriers) as they battle it out for the top prize and more importantly, a winning start to the season.

Although touted by us as the ‘favourites’ the aforementioned famous five will have a quality field to contend with – Timothy Johnston (Mourne Runners), David Hicks (Newcastle AC) and Keiron Kelly (Newry AC) are just three men to look out for; a podium place is not out of the question if they run well.

Reigning Champion from this event, Esther Dickson (Newry AC) will come off a strong cross-country season with hopes of retaining her title and continuing to build an excellent name for herself within the local mountain running scene.

The humble Newry AC athlete really came to the fore in 2017 and this culminated in international selection.  This year there is sure to be expectation and with that comes pressure, but Esther won’t be put off by this.

Garmin Mourne Skyline MTR 2017 winner Shileen O’Kane (Lagan Valley AC) will toe the line and after helping her Lagan Valley AC team mates to a medal at the NI & Ulster Senior XC Championships two weeks ago, the experienced international will go into the mountain season high in confidence.

Eight hundred athletes are expected to descend on the Maiden City of Derry/Londonderry for the annual SSE Airtricity 10 mile road race on Saturday 10th March 2018.

The event is popular with those building towards upcoming 13.1 mile races, or indeed, the events big brother/sister – the SSE Airtricty Walled City Marathon.

The route, which starts in Ebrington Square, will see competitors hug the banks of the River Foyle, crossing both the Peace Bridge and the Foyle Bridge before finishing adjacent to St Columbs Park running track.

At the sharp end, North West man and current NI & Ulster 10k (Road) Champion Scott Rankin (Foyle Valley AC) should control things.  Scott has a personal best of 51:47 for the distance and that will make him hard to beat.

Also chasing the podium will be Steven McAlary, who will lead a huge number of Springwell Running Club athletes around the course.  Enniskillen RC’s Dave Slater should also finish well up the field, as will local men Mark Mullan (City of Derry AC) and Jonathan Canning (Foyle Valley AC).

In the ladies race, Ann-Marie McGlynn (Letterkenny AC) may compete as she returns from injury.  The immensely talented athlete won last week’s Carmen 10k in 34:39; this was enough to see the Euro XC team medallist take 3rd place overall.

Foyle Valley AC’s Gemma McGinty and City of Derry AC’s Jackie McMonagle should also be there or there abouts, as should Hannah Shields (City of Derry AC) and Irene Clements (Enniskillen RC).

Other events taking place in Northern Ireland this weekend:

A team of nine Northern Ireland & Ulster athletes will travel to Loughborough this weekend for the UK Inter-Counties XC Championships at Prestwold Hall (Saturday 10th March 2018).

Athletics Northern Ireland have been invited to enter athletes into this event to compete against the counties and districts of England, Scotland and Wales.

The event also incorporates the final round of the British Athletics Cross Challenge; the Antrim International XC was part of the same prestigious Series.

City of Lisburn AC star Kelly Neely will lead the local contingent in their hunt for medals and if the former World Masters Champion’s form is anything to go by, she should return with gold.

Kelly impressed most recently at the AAI National Senior Indoor Championships, were she claimed silver over 1500m, clocking 4:20.63.  The well-respected athlete and coach also recorded 4:16.25 over the same distance at the AIT Grand Prix three weeks ago.

A full entry list and timetable are available HERE.

Northern Ireland and Ulster will be well represented, with athletes competing for a host of universities and colleges – both Queen’s University and the University of Ulster are expected to field strong teams.

More details on the event can be found HERE.

As always, Northern Ireland’s twenty-five parkrun events will take place this weekend, for more information on these, or to locate your nearest event, please visit our dedicated ‘parkrun’ section within our fixtures page.